ESPN today announced an update to its iOS app that will let users stream live sporting events from the separate WatchESPN service directly within the core app, a feature that would previously redirect users to a separate download of WatchESPN. Specifically concerning videos, the ESPN app before today's update only allowed for short clips and game highlights. 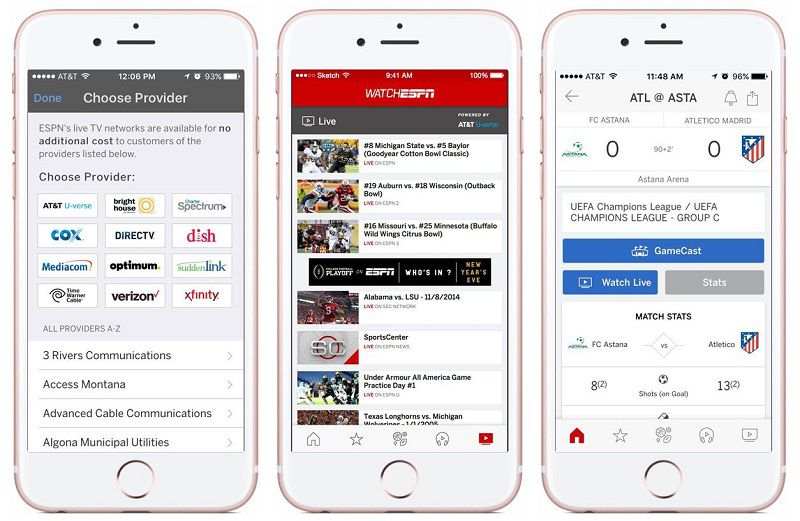 “Offering the convenience of live streaming within one app reinforces the value of the multichannel subscription,” said Sean Breen, Senior Vice President of Affiliate Sales, Disney & ESPN Media Networks. “Even with WatchESPN’s recent record-breaking viewership, we continue to be aggressive in driving awareness to a large scale audience and to incentivize video subscribers to authenticate.”

ESPN representatives promised that logging into the new app will be the same process as before, and users can expect to see a simple "WatchESPN" tab at the bottom right of the screen. On the iPad, the app will also support multitasking with a picture-in-picture mode that keeps playback rolling even as users leave the app's homepage.

The company noted that it will be keeping WatchESPN up on the App Store as a solo, "full experience," for those who specifically want live streaming capabilities and none of the various other game-tracking features of the base app. To use WatchESPN in any capacity, users have to check for support from their cable provider and then link the two accounts within the app.

ESPN mentioned that the move to consolidate its two popular mobile apps comes after "record-breaking audience viewership" for its WatchESPN software across all platforms of its availability. September was its most-viewed month ever -- excluding months the World Cup took place -- with 11 million total viewers on the app that watched 2.2 billion minutes in total of ESPN content.

Disney needs to follow HBO's lead and break away from the constraint of the cable companies. There should no longer be any need to authenticate with a cable provider in order to use an app on a mobile device.

Huh? The "free" HBO requires an HBO subscription and authentication. The other, newer, HBO requires you to pay for a subscription.
Do you really expect a cable channel to give you free access? Or are you asking for an ESPN channel that require a monthly subscription?
Rating: 1 Votes
[ Read All Comments ]