A recent Consumer Reports survey shows that MacBooks continue to lead all notebooks in reliability and customer satisfaction, based on 58,000 subscribers who purchased laptops between 2010 and 2015.

ZDNet reports that almost 20% of the respondents experienced a breakdown in the first three years of using a notebook, but MacBooks had notably lower failure rates compared to various Windows-based notebooks from Acer, Lenovo, Samsung and other OEMs. MacBook Air had just a 7% estimated failure rate, while the MacBook Pro was slightly higher at 9%.

Apple, as in year's past, has the most reliable notebooks by far - a 10 percent breakdown rate in the first 3 years - with Samsung and Gateway distant seconds at 16 percent, and the rest of the industry - including Acer, Lenovo, Toshiba, HP, Dell and Asus, at 18-19 percent.

Windows machines used more than 20 hours a week - average for Windows systems - have a higher break rate. Apple users report using their machines an average of 23 hours a week, 15 percent more. More hours, fewer breakdowns, what's not to like?

When MacBooks do break, however, the survey found they are often more expensive to fix, which is why purchasing AppleCare is recommended. Apple provides 90 days of complimentary phone and online chat support that can be extended for a total of three years with an AppleCare Protection Plan for Macs at a cost of up to $349.

In terms of customer satisfaction, 71% of MacBook owners were "completely satisfied with system reliability," compared to "only 38% of Windows notebook owners."

The complete survey results are available at Consumer Reports for subscribers only.

convergent
Clearly this is more evidence that Apple is evil and totally controls and manipulates western media with propaganda.

iapplelove
Put me down as completely satisfied.
Score: 28 Votes (Like | Disagree) 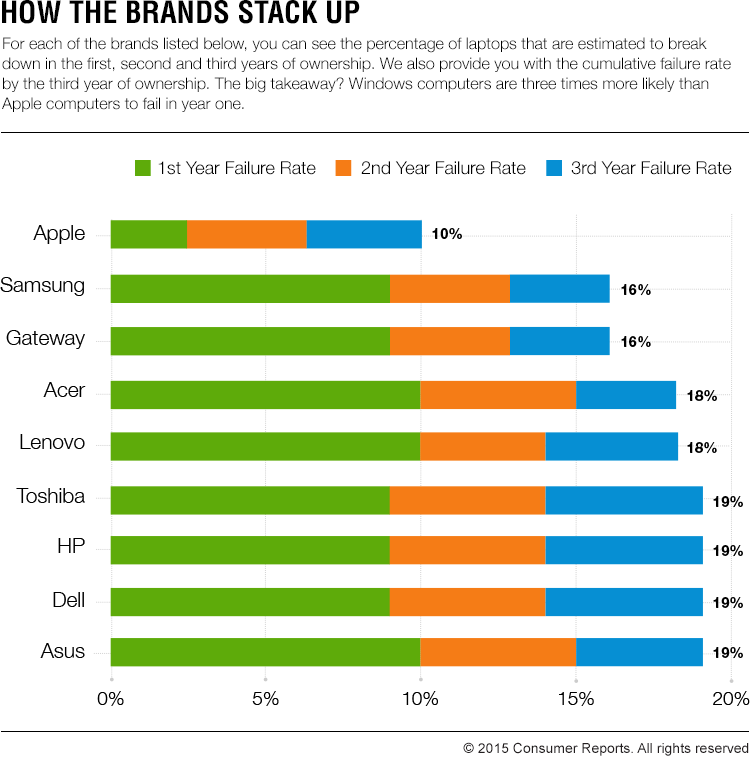 polterbyte
In other news, water is wet.
Score: 19 Votes (Like | Disagree)

No, it's not. It's a ridiculously large sample size.
Score: 12 Votes (Like | Disagree)

NissanGuy23
My 2010 MBP is still going strong and i use it every day. Cheaper PC laptops seem to have a one or two year lifespan and need to be replaced frequently. So much for saving money..
Score: 10 Votes (Like | Disagree)
Read All Comments