iFixit is in the process of tearing down the iPad Pro, providing a closer look at how Apple organized the internals of the larger iPad. While the majority of the internal layout is similar to the iPad Air 2, there are some significant differences, including the inclusion of a brand new four-speaker audio setup. 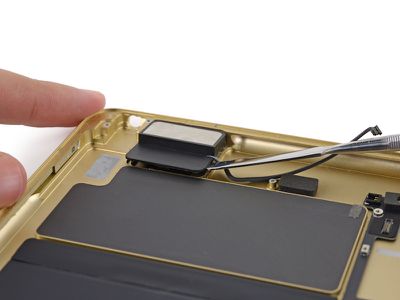 Each corner of the iPad Pro has a speaker driver sitting next to a capped resonance chamber. Each speaker is designed identically, as the iPad Pro shifts the speaker's function depending on the orientation of the device. The two speakers on top provide higher frequencies while the bottom speakers provide lower frequencies.

Once it removed the speaker drivers, iFixit uncapped the volume chambers, which Apple says gives the iPad Pro's speakers 61 percent more "back volume" than previous iPads. Underneath the carbon fiber caps are enclosures filled with foam, which are used to amplify the speaker's sound. However, iFixit notes that the speakers take up a significant amount space that could have been used to increase battery capacity by 50 percent. Previous iPads, due to the lack of premium speakers, were able to dedicate a greater proportion of space to battery capacity.

The teardown also found that the iPad Pro uses the DP695 Timing Controller, which may be an iteration of the DP665 LCD timing controller found in the 5K Retina iMac. However, as noted by iFixit, the iPad Pro's timing controller is likely modified to better use the display's refresh rate. Also, the teardown experts found that Apple has added adhesive pull tabs under the iPad's batteries, making them easier to remove.

Finally, iFixit's teardown offers physical confirmation that the iPad Pro includes 4 GB of RAM, which was confirmed by Apple's own Xcode tools in mid-September.

iFixit's teardown is ongoing, and this post will be updated if any other significant discoveries are made.

Update: iFixit has discovered that the iPad Pro has a 10307 mAh battery.

Update 2: iFixit has given the iPad Pro a repairability score of 3 out of 10, noting that the Smart Connector is unlikely to fail given its lack of moving parts and despite it being "virtually impossible to replace." The main issue is that the iPad Pro uses a lot of adhesive to hold everything together, making things difficult to replace.

Rogifan
Of course this is the only headline MR could have chosen. :rolleyes:

Stupid Apple putting decent speakers in this device. Because no one will be using it to consume audio or video and if they do they'd surely be using headphones or Bluetooth speakers. And using that space for bigger batteries wouldn't make the device heavier and more uncomfortable to hold for longer periods of time. /s
Score: 61 Votes (Like | Disagree)

DoctorKrabs
So after years of the iPad being known for great battery life and mediocre speakers, this is the headline we see once Apple puts good speakers in one.
Score: 48 Votes (Like | Disagree)

Id rather a bigger battery than better speakers to be honest.. The only sounds my iPad air makes out loud at the moment is notifications.. if I even have it off silent. Everything else goes through my Beats Studios or EarPods.

I guess the question is how much the extra battery would weigh. I doubt the speakers way as much as the battery would!
Score: 34 Votes (Like | Disagree)

Speedman100
BREAKING NEWS: Logic board takes up potential battery space! Certainly people would like an iPad without a processor to achieve greater battery life.
Score: 34 Votes (Like | Disagree)

If anything the prices could use a little bit of thinning.
Score: 29 Votes (Like | Disagree)

Orlandoech
Next year it will be thinner with 5 speakers and less battery.
Score: 22 Votes (Like | Disagree)
Read All Comments