EmojiWorks is today debuting the first hardware-based emoji keyboard, which is designed to make it easier for users to quickly type their favorite emoji using built-in shortcut keys. The keyboard looks like a standard Apple-style keyboard, but it includes emoji symbols. 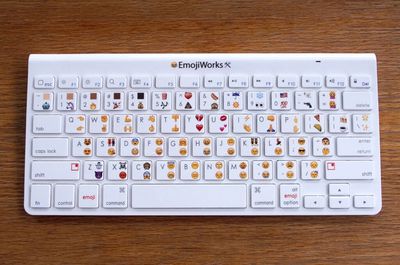 Each key on the Emoji Keyboard from EmojiWorks includes an emoji in addition to a letter, which can be inserted by pressing a dedicated emoji key along with the key that houses the desired emoji. The keyboard features many popular emoji like the poop, thumbs up, unicorn head, taco, heart, and a series of faces.

According to EmojiWorks, typing emoji with the keyboard is up to 10 times faster than the standard emoji typing method. The Bluetooth-enabled keyboard is able to work with both Macs and iOS devices. Because the emoji shortcuts are pre-programmed and the emoji pre-printed on the keyboard, the emoji keyboard is not customizable. Some favorite emoji may be missing, so while you can ask a co-worker to get tacos for lunch, you're out of luck if you want burritos.

Each version of the Emoji Keyboard can be pre-ordered from the EmojiWorks website starting today.

keysofanxiety
What a cancerous idea for a product. I'd say this is up there with the selfie stick, but it's even worse than that.
Score: 10 Votes (Like | Disagree)

yeld
This is the only good emoji keyboard.
Score: 10 Votes (Like | Disagree)

I'll just let this sink in.
Score: 8 Votes (Like | Disagree)

BigMovieGeek
This is how the world ends. Not with a bang, but with an Emoji keyboard.
Score: 6 Votes (Like | Disagree)

Alex Moran
Well this is for me personally