Extending its partnership with Apple, IBM is now planning to provide its employees with free or discounted Apple Watch models as part of a "Commit to Health" initiative that will see the Apple Watch distributed to employees under their health insurance plans.

Based on the health plan an IBM employee chooses, they can either get a subsidy that covers the full cost of an Apple Watch or the option to purchase an Apple Watch at a reduced price. IBM is likely hoping its employees will take advantage of the Apple Watch's fitness tracking capabilities, racking up steps and meeting exercise goals to stay healthy.

IBM had a similar program that saw employees provided with Fitbit activity trackers, but it is not clear if the Apple Watch is supplementing this program or replacing it. With the Fitbit program, exercising and taking steps let employees accumulate points that were able to be redeemed for merchandise or charitable donations. 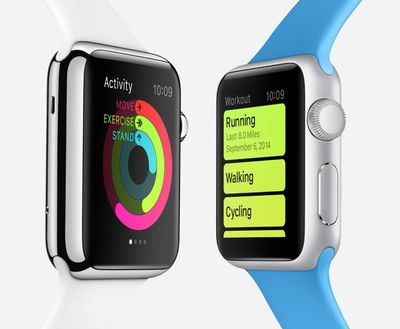 Several health insurance companies and businesses have teamed up to adopt similar programs in an effort to cut down on healthcare costs, incentivizing exercise and activity with lower premiums and other rewards. Fitbit, for example, works with a large number of companies to incorporate activity tracking into corporate wellness programs.

Most of these programs existed before the Apple Watch launched, but the Apple Watch itself has proven to be a highly useful tool that motivates wearers to exercise, and it's possible additional companies could follow in IBM's footsteps in the future.

The Apple Watch encourages users to stand up once per hour, exercise, and burn calories to achieve goals. Many early Apple Watch adopters have said the device has motivated them to make better lifestyle choices, increasing their daily activity. Jim Dalrymple of The Loop, for example, credits HealthKit and the Apple Watch for his weight loss of 40 pounds.

Update: MacRumors has been informed that IBM will continue working with Fitbit for its corporate wellness program. The Apple Watch will not replace the Fitbit in the program and will instead be offered alongside it.

Will Tim Cook report these as sales (if he ever reports any)?

The insurance company and/or IBM is paying for the watches. So they will be counted as sales for Apple.

This is a a smart move for companies/insurance plans if the watches do encourage employees to improve their health. Also, employees will probably think its cool which is good for morale.
Score: 14 Votes (Like | Disagree)

Buran
Is this going to require you to send your activity data to IBM and/or its insurer?
Score: 7 Votes (Like | Disagree)

OldSchoolMacGuy
This is going to become more and more common. Think of it like the Progressive Snapshot for your body. If you can show you're working out more and getting enough sleep, you can get lower insurance because you're taking better care of your body. Much the same as putting the Snapshot in your car shows you don't drive at high risk times or in a high risk way.

Give up some privacy in turn for a discount.

This is actually part of the Affordable Care Act which requires insurers to interact with their customers. If they can build in a way to interact with people about their health then they can meet some of those additional requirements easier.
Score: 5 Votes (Like | Disagree)

Will Tim Cook report these as sales (if he ever reports any)?

So are all those Surface Pro props at NFL games and PGA Tour events counted as sales?
Score: 4 Votes (Like | Disagree)
Read All Comments