Apple today updated its Maps app for Mac and iOS with new Flyover locations in number of cities and "Nearby" location listings in Australia, Canada, France, and Germany. Introduced in iOS 9, the Nearby feature displays restaurants and stores that are located close by. When searching in the Maps app, Nearby shows up as a list of categories like Food, Drinks, Shopping, and Fun.

Nearby was previously available in the United States and China, but today expands to Australia, Canada, France, and Germany for a total of six locations of availability. 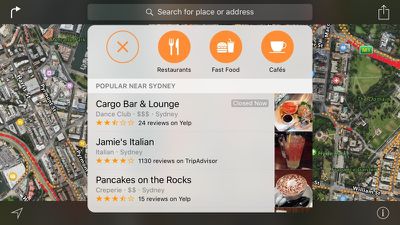 For those unfamiliar with the Flyover feature in Apple Maps, it lets users take photorealistic 3D tours of select areas, which can be navigated through to display close ups of notable landmarks and points of interest.

Flyover was first introduced alongside iOS 6 in 2012, and over the course of the last few years, Apple has been steadily adding new Flyover locations to the Maps app, with a full list available on its iOS 9 Feature website. As of February, some Flyover locations have also been updated with real-time animated landmarks, making the Flyover experience even more immersive, and many Flyover locations also have an additional City Tour feature that walks users through a series of landmarks in each city.

thmsup
Bielefeld doesn't even exist - at least that's what they say in Germany
Score: 11 Votes (Like | Disagree)

Apple maps is a still joke and beta from beta. They are years behind schedule.

Flyovers. Its Are really not that use full.

Togeter with Siri is maps not adult software.

A "joke" that works much better than Gmaps in my area (Northern Italy), with much better, recent satellite imagery (Google images are ridicolously old, about 10 yrs).

EDIT: added example. Apple Maps: Calatrava bridge up and running, Gmaps, bridge under construction (not even raised yet). Years and years. And this is a very popolous, developed part of Italy.

USB-Adapter
Bielefeld is a fake city, an internet joke, it does not actually exist.
Score: 4 Votes (Like | Disagree)

I still maintain that this feature looks great for the first 30 seconds you play with and then is completely useless the rest of the time you own an iPhone.

I use Flyover regularly. It's an excellent way of getting around a city from a bird's eye view and then zooming in for more detail. I much prefer this over StreetView. Some cities (including the one I'm in) have been improving resolution to the point that you can see storefronts from the sky, effectively giving it a StreetView-like functionality.
Score: 2 Votes (Like | Disagree)

Malcster
Surprised at lack of Nearby for UK.. its been on and off a few times during the beta and since release.
Score: 2 Votes (Like | Disagree)
Read All Comments