Apple yesterday updated its 3D "Flyover" map of London, adding animated images onto popular London-based attractions that result in real-time moving pictures right inside of the Maps app (via The Daily Mail).


The update causes the current time to be showcased on the face of Big Ben's clock tower, and the popular giant London Eye to constantly rotate when users find each structure in the London Flyover map. The feature, according to The Daily Mail, is expected to hit other big cities "within weeks."

Though a straightforward and purely aesthetic update, the addition of real-time animated effects in the Maps app brings a more immersive experience to Apple's mobile map service and could give it a slight edge on competing map apps. 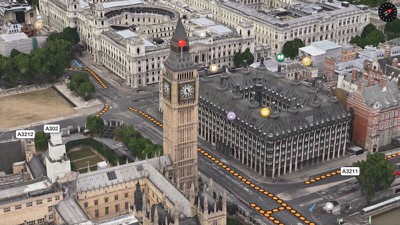 Thanks to hefty amount of criticism following the rocky launch of Maps, even resulting in a public letter of apology by Tim Cook, Apple has been steadily attempting to straighten the app's course and win back the users that migrated to services like Google Maps in the intervening years.

Apple has steadily improved the accuracy of its maps, increased the number of points of interest displayed, and improved the quality of its Flyover imagery, while also reportedly working to add new features such as transit directions and indoor mapping information. Apple-leased minivans with equipment rigs on top have also been seen in a number of U.S. cities in recent months, suggesting the company may be collecting street-level imagery to compete with Google's Street View.

AMDeeb
What about actually improving accuracy of maps and POI? (Especially in developing countries where Google is miles ahead)
Score: 20 Votes (Like | Disagree)

szw-mapple fan
This is wickedly cool.
Score: 12 Votes (Like | Disagree)

NMBob
About as useful as emoticons.
Score: 11 Votes (Like | Disagree)

Friday June 5, 2020 7:06 am PDT by Eric Slivka
Roughly four months after hitting an all-time high just before financial markets and economies faltered in the face of the current public health crisis, Apple's stock price has returned to those levels and has set a new all-time high today. Apple's previous intraday high of $327.85 was set on January 29, and that high-water mark was surpassed just a few minutes ago as it hit $328.00 before...
Read Full Article • 66 comments