Apple today released iOS 9.1 to the public, marking the first major update to the iOS 9 operating system that launched in September. In testing since before iOS 9 was even released, iOS 9.1 was beta tested for more than a month before its launch, with developers and public beta testers receiving five betas in total.

Today's iOS 9.1 update is available as an over-the-air update to all iOS 9 users. It is the third update to iOS 9 so far, with Apple having previously released iOS 9.0.1 and iOS 9.0.2. Apple has also released Xcode 7.1 and the tvOS golden master (GM), which represents the final version of the software that will be available when the new Apple TV launches next week. 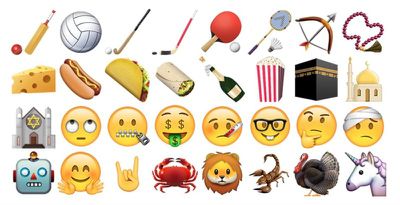 A selection of the new emoji in iOS 9.1, via Emojipedia
iOS 9.1 includes an update for Live Photos, which now sense when the iPhone is raised or lowered to refrain from recording unnecessary movements. The update also introduces a new Messages option in the Settings app that is designed to allow users to disable photos for contacts, and it brings Apple News to the UK and Australia for the first time.

This release includes new features, improvements, and bug fixes, including:

- Live Photos now intelligently senses when you raise or lower your iPhone, so that Live Photos will automatically not record these movements
- Over 150 new emoji characters with full support for Unicode 7.0 and 8.0 emojis

Aside from these changes, iOS 9.1 includes new features and compatibility updates for upcoming Apple products like the fourth-generation Apple TV and the iPad Pro The new Apple TV requires iOS 9.1 to be set up using an iOS device.

iOS 9.1 also includes bug fixes for a number of issues that iOS users have been experiencing, and as with most iOS updates, it enhances performance and introduces important security fixes.

Time to update my 4S from iOS 6 to this!

The future is back!

You make billions of dollars, and you make an update for emoji..

You are so creative Apple!

Yup, clearly that's all that was in the update.
Score: 10 Votes (Like | Disagree)

Benjamin Frost
The future is back!
Score: 9 Votes (Like | Disagree)

Wow! New emoji. The world is saved. I can sleep well tonight.

Who gives a crap?

Thanks for the constructive input :rolleyes:
Score: 8 Votes (Like | Disagree)