Following the unveiling of the new Apple TV back in September, United Kingdom-based public service broadcaster BBC told fans on Twitter that there were "no plans currently" to develop an iPlayer app for the new platform. While the broadcaster has backtracked slightly since that time, more recently stating it doesn't "have any info to give" on the topic, with the launch of the Apple TV right around the corner, a couple of Dorset-based developers have taken the task into their own hands to prove that the app can be made with relative ease. 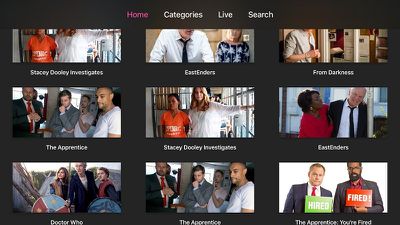 Screenshot from the proof of concept iPlayer app
The BBC iPlayer app allows viewers of the popular British channel to catch up with current series and watch live TV on a smartphone or tablet. The company expanded support for the service to streaming devices like Chromecast and smart TVs last year, but never made the leap to Apple TV due to its limited SDK support and nonexistent functionality with other platforms like Android. Now, a pair of developers from Bournemouth, Dorset in the United Kingdom -- Matt Cheetham and Phillip Caudell -- have used a recent hack event to prove Apple TV support for BBC iPlayer could be implemented fairly easily by the broadcaster.
The pair took to GitHub to share the app they created, dubbed the "Auntie Player," which splits the iPlayer experience up into Home, Categories, Live, and Search tabs, with full episode lists, descriptions, and run times for each show. Cheetham and Caudell cite BBC's "disappointing response" from September as the main source of inspiration for the proof of concept app, pointing out BBC's failure to support Apple TV as a direct contradiction to its public purpose to "make engaging digital content and services available on a wide range of digital platforms and devices."

Most impressively, the duo planned, coded, and completed the app in under nine hours at the "Hack to the Future" event in Bournemouth over the weekend. As they note in the GitHub post, the two won't be submitting the app to the App Store, but they wanted to showcase "what can be achieved with the tvOS platform and the BBC's amazing content."

The app we're publishing here was built in just under 9 hours at a hack event to prove it could be done. It's by no means complete or perfect, and it's very much a proof of concept. It's our hope the BBC will release an official app for Apple TV, as they've made iPlayer available on a wide range of other set-top boxes and Smart TVs.

Check out the developers' full suite of source code for Auntie Player on GitHub, along with an array of screenshots and more of the reasoning behind sharing their creation with the public.

With Apple's new tvOS developer tools for the fourth-generation Apple TV, the platform is now open to all developers, significantly broadening the potential for Apple's set-top box beyond the locked-down content provider model that has existed until now. Just yesterday, Apple CEO Tim Cook reiterated his thoughts that the television experience needs to be reinvented and that apps are the way to do it.

LiE_
I won't be getting the new ATV until all the catch up services are available. It's a minimum requirement in the UK.
Score: 10 Votes (Like | Disagree)

nightcap965
I understand that the British pay for the BBC through their television tax, and do not expect that they would give their American cousins access to iPlayer without charge, but surely there must be some way to make it a pay service. I would love greater access to British television.
Score: 10 Votes (Like | Disagree)

kemperman
Why don't these guys polish it up and then sell to the BBC?
Score: 7 Votes (Like | Disagree)

Wait, these Brits literally have to pay a TV tax. They should be able to watch programming on every and any device they want. I can't see any logical reason why BBC would NOT be developing an app.

Better a "TV tax" as you put it than the rubbish that passes for broadcast TV in the states. At least our broadcast TV is thoroughly excellent, and on the BBC without ads in addition. To put it in perspective, because everyone (almost) pays the BBC subscription it only costs about £12 per month. Sky on the other hand, that produces virtually no original programming, is typically in the region of £30+ per month. I know which model I prefer!
Score: 6 Votes (Like | Disagree)

One thing I noticed is the speed of playback... I wonder if that was edited or really fast due to some other reasons? That seemed impressive.

Or maybe I have a lame connection here and just expect everyone else gets a 5-10 second buffer lag before playback? :)

Hey, one of the developers here.

No editing: it really is that fast! The stream will start off low quality and quickly ramp up to full 1080 quality. We've also skipped out the idents which the website adds at the start of each video, which slows things down.
Score: 6 Votes (Like | Disagree)

I also enjoy the differences in language such as "colour" vs "color" or "boot" vs "trunk" :D.

Wednesday January 26, 2022 8:56 am PST by Joe Rossignol
Benchmark results have started to surface for MSI's new GE76 Raider, one of the first laptops to be powered by Intel's new 12th-generation Core i9 processor. Intel previously said that its new high-end Core i9 processor is faster than Apple's M1 Max chip in the 16-inch MacBook Pro and, as noted by Macworld, early Geekbench 5 results do appear to confirm this claim, but there are several...
Read Full Article • 319 comments

Thursday January 27, 2022 1:22 pm PST by Juli Clover
In today's iOS 15.4 beta that's available to developers, Apple added a useful new feature that changes the way Face ID works. There's now a Face ID with a Mask option that allows the iPhone to be unlocked when you're wearing a mask, but you need to have an iPhone 12 or newer. Right now, an iPhone can be unlocked with a mask if you have an Apple Watch for authentication to add an extra layer...
Read Full Article • 91 comments