Apple TV Gains CBS All Access, NBC, and Made to Measure Channels

Just a week ahead of the launch of the fourth-generation Apple TV, Apple has added several new channels to the existing set-top box. As of today, NBC, CBS All Access, and Made to Measure (M2M) are available on the Apple TV.

The new NBC channel is the first time the network has had a channel available on the Apple TV, aside from the dedicated NBC Sports channel. With the NBC channel, customers can watch full episodes of NBC shows on the Apple TV. Cable authentication is required for some features, but all users can watch some NBC content on the channel without needing a subscription. 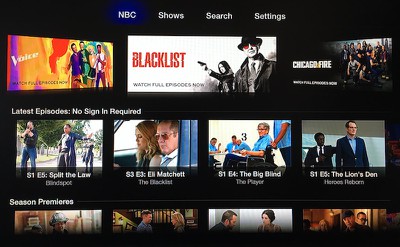 All three of the new channels are available immediately on the existing Apple TV, and will also be available on the new set-top box that's launching on Monday.

zorinlynx
So tired of this "cable provider authentication" crap...

If they want cord cutting to take off they really need to end that requirement. I couldn't even watch the baseball game Sunday night because FS1 wanted a cable provider login.
Score: 19 Votes (Like | Disagree)

randall311
Doubly annoying when it's for channels that are "free" over the air and shouldn't even be considered "cable" channels.

They (the networks) don't want cord cutting to take off.
Score: 13 Votes (Like | Disagree)

macduke
I'm willing to pay for channels/packages. Unfortunately for them they won't sell them to me, so I'll just sign in with my parent's cable subscription like most people 30 and under who have cut the cord. Don't take my money—see if I care?
Score: 9 Votes (Like | Disagree)

They're a cable channel. Why wouldn't they want to make sure you're paying them?
Score: 8 Votes (Like | Disagree)

I'm willing to pay for channels/packages. Unfortunately for them they won't sell them to me, so I'll just sign in with my parent's cable subscription like most people 30 and under who have cut the cord. Don't take my money—see if I care?

Until Daddy becomes a cord cutter too.... D'OH!
Score: 6 Votes (Like | Disagree)
Read All Comments

Thursday June 4, 2020 10:07 am PDT by Juli Clover
We still have a few months to go before Apple unveils the iPhone 12, but rumors about the iPhone 13, coming in fall 2021, are already circulating. Japanese site Mac Otakara today shared a rough 3D printed mockup of a 5.5-inch iPhone said to be coming in 2021, which is from "Alibaba sources." The model may be built on leaked specifications and rumors, but where the info comes from is unclear. ...
Read Full Article • 103 comments