iFixit has published detailed teardowns of the new Magic Keyboard, Magic Mouse 2 and Magic Trackpad 2, providing a closer look at the internal design and several matching components inside the trio of accessories. 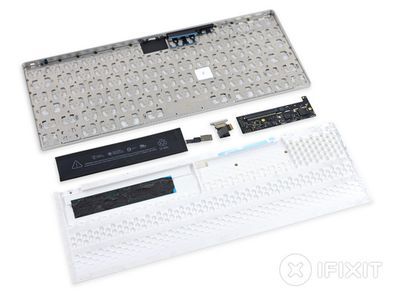 Dude, you can get a 9 hour charge in a couple minutes. Go get some coffee and come back. Then use your charged mouse. Then set up to charge before sleeping.

Say what you want about the price, but this isn't as much of a burden as people are making it out to be.
Score: 20 Votes (Like | Disagree)

Yes. If you ignore several days of "low battery" warnings, you will sit down and wait for two minutes while you build up enough charge to last eight or nine hours. Then you'll plug it in overnight to get a full month's use, and you'll promise yourself not to run it down to zero again in the future.

You don't actually have to sit down for those two minutes. For at least one of them, you can stand up and walk around so your Apple Watch doesn't nag you about not reaching your goal of standing up for a minute at least once an hour.
Score: 17 Votes (Like | Disagree)

I thought the Magic Trackpad 2 requires a Mac supporting Bluetooth 4.0 and yet it only has the same Bluetooth 3.0 chip as the other Magic devices?
Score: 10 Votes (Like | Disagree)

I agree the Lightning cable is placed inconveniently -- the only justification I can think of is at least it has 2-minute fast charging for 9 hours of usage.
Score: 7 Votes (Like | Disagree)

Corrode
I reeeeally want a Magic Trackpad 2 but can't justify the $$$.
Score: 7 Votes (Like | Disagree)

840quadra
Amazing to think that these devices have more CPU power than many early Macintosh Computers themselves!

And as they say in the movie Hackers, RISC is good ;) .
Score: 7 Votes (Like | Disagree)
Read All Comments