Just weeks before the Apple TV 4 is expected to be released worldwide, select Apple Authorized Resellers in Europe have begun accepting pre-orders for the new set-top box. The Apple TV 4 is officially slated to launch in late October, but the majority of orders are unlikely to be fulfilled until November. 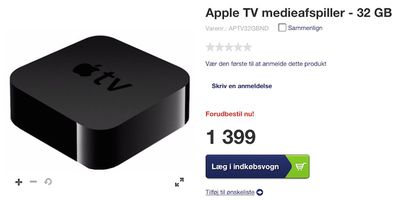 Electronics retailer Elgiganten, equivalent to Best Buy in the Nordic Region, is accepting Apple TV 4 pre-orders in Denmark and Norway with expected delivery in November. The 32GB and 64GB models are listed for 1,399 and 1,849 Danish kroner and 1,749 and 2,299 Norwegian kroner respectively.

German electronics retailer Cyberport has also listed the Apple TV 4 and iPad Pro for pre-order on its website. The authorized reseller lists the 32GB and 64GB Apple TV 4 for €179 and €239 respectively, which could be indicative of broader European pricing, although prices in other countries will likely vary depending on local taxes.

(Thanks, Rasmus and Maxime!)

cmChimera
I got so excited when I saw the notification 'Apple TV 4 pre-orders begin'
Score: 24 Votes (Like | Disagree)

I'm a long-time TV user, but lack of 4K support is a total deal breaker to me upgrading. The app store is neat, but video content is the absolute bread and butter of this device and they didn't get it right. I can't fathom what Apple was thinking. 1080P TVs over 50" are already becoming scarce in stores.

Sorry, but I have been laughing at the 4K whiners since the ATV4 introduction. Its a syndrome where people want to act as if they have/can afford the best even if they dont really know what they are talking about.

The lack of 4k is a non-issue at this point in time because:

1.) lack of TRUE 4K content
2.) lack of TRUE 4k hardware (with the necessary HDCP 2.2 through the WHOLE hardware chain)
3.) Most 4K TVs are not TRUE 4K but up-converted (did your "4k" TV from Best Buy have lots of "4K" stickers on it?) and they likely will not play true 4K in the future:

With the introduction of 4K UHDTV, a brand new, even more robust version of HDCP was developed, 2.2. And for UHDTVs to display a true 4K image, every link in the digital chain must be HDCP 2.2 compliant. And, unfortunately, there is no upgrading a non-2.2 device.

This means many early adopters have purchased TVs boasting 4K resolution but that aren’t HDCP 2.2 compliant. These are all the CHEAP 4K TVs with lots of "4K" stickers on them! If other devices in the video distribution chain—such as an A/V receiver—aren’t HDCP 2.2, they will be unable to enjoy true 4K.


To cry about the ATV4 not having this marketing gimmick called 4k is hilarious. Yes, 4K will be as real in the future as 1080p is today, but not now and not before ATV4 or 5....suckas!
Score: 5 Votes (Like | Disagree)

JoeShades
Why does every Apple tv thread have into turn into a damn 4K discussion?
Score: 4 Votes (Like | Disagree)

Do you think they will be able to enable 4K support / airplay via a software update or is it a hardware thing?

It's a hardware thing.

No. Legally they can't enable such things without charging for the update as they've been required to do in the past. They'll just sell you new hardware in the future if they choose to add 4k support.

I'm a corporate lawyer and would love to learn about this law that prevents companies from providing free updates -- please share!
Score: 3 Votes (Like | Disagree)
Read All Comments