Only a limited number of fans have been able to see Steve Jobs over the weekend, thanks to its initial small scale release in only Los Angeles and New York on October 9. Despite that limited run, the Danny Boyle-directed film has debuted with impressive numbers, making $521,000 in its first weekend with a per-theater average of $130,250 (via Variety). 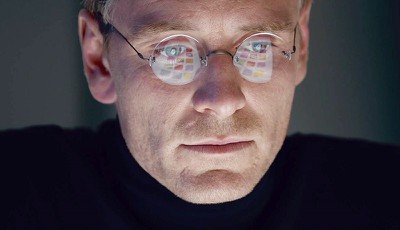 Although those numbers landed the movie well below any top-earning spot for the weekend box office at large (it placed sixteenth overall), that per-theater average places Steve Jobs as the fifteenth highest PTA figure in film history. As the rollout for the film expands -- 25 new markets and 60 theaters on October 16, and then 2,000 theaters on October 23 -- Universal has doubled down on its release strategy, believing the slow trickle to wide release will help generate positive word of mouth.

“By holding back and platforming it in this way, we let the public know what this movie is all about and we generate a hotter ‘want to see’ among audiences,” said Nick Carpou, head of Universal’s domestic distribution operation.

Universal hopes these limited release numbers translate into bigger returns when Steve Jobs debuts in wide release next weekend, aiming for a similar trajectory as The Social Network's $97 million overall domestic haul. Current analysts predict at least a $20 million opening wide release weekend for the new film, pointing to the ubiquity of Apple products, largely positive early reviews, and the audience's hunt for "prestige movies" at this time of year as the main factors for its potential success.

and the audience's hunt for "prestige movies"

What the heck is a prestige movie and why are people hunting for them?
Score: 15 Votes (Like | Disagree)

2457282
Just slightly off topic - I am wondering about the whole going to the movies thing. Pretty much everyone now has a large TV screen at home (for the sake of argument say 40 inch or larger). With streaming like Netflix or Apple TV, I really don't see why people are drawn to pay so much to go to the movies. I will wait for this to come to one of my streaming services and then maybe I will watch it. But paying over $20 just for the tickets (not to mention transportation and other expenses associated with going out), for a movie that will play well on my screen at home makes no sense. Congrats to the movie for making tons of money, but please wait a little while longer before you get a few dollars from me.
Score: 11 Votes (Like | Disagree)

Rocketman
Several posters to this site keep referring to hardcore fans and fanboys.

The fraction of any population that is a so-called fanboy is under 1%. Yet they have a large portion of the mindshare and mocking by some posters here.

That makes me believe they are on the other end of the bell curve themselves. Anti-fanboys.
Score: 7 Votes (Like | Disagree)

That's how much money talking about Steve Jobs (right or wrong) makes...

If it were a movie about Nicola Tesla, Hewelet and Packard (the founders), Fairchild, etc...

Would it make that much money?

Actually, if Hollywood executives approached me and asked if I would rather see a movie about Steve Jobs or Nicola Tesla, I'd probably pick Tesla.
Score: 6 Votes (Like | Disagree)

That's how much money talking about Steve Jobs (right or wrong) makes...

If it were a movie about Nicola Tesla, Hewelet and Packard (the founders), Fairchild, etc...

Would it make that much money?

If it wasn't for Nicola Tesla, Steve Jobs would have been a nobody.

Our education system has truly failed.
Score: 5 Votes (Like | Disagree)

Several posters to this site keep referring to hardcore fans and fanboys.

The fraction of any population that is a so-called fanboy is under 1%. Yet they have a large portion of the mindshare and mocking by some posters here.

That makes me believe they are on the other end of the bell curve themselves. Anti-fanboys.