Last week Apple addressed concerns over battery life discrepancies between the TSMC and Samsung A9 chips used in the iPhone 6s and the 6s Plus, suggesting a real world battery life difference of only two to three percent between the chips despite Geekbench battery tests that had pointed towards a bigger gap.

Ars Technica has now conducted controlled battery life tests on two iPhone 6s models, one with a TSMC chip and one with a Samsung chip, and its findings line up with Apple's statement. The site used two AT&T models, both with SIM cards removed and screen brightness set at the exact same level.

In Wi-Fi browsing, WebGL, and GFXBench tests, there were performance differences mostly in favor of the TSMC iPhone, but the variation between the two phones was slight. There was a more significant performance difference on the Geekbench 3 test, but as has been covered earlier, that test is not reflective of real world usage. 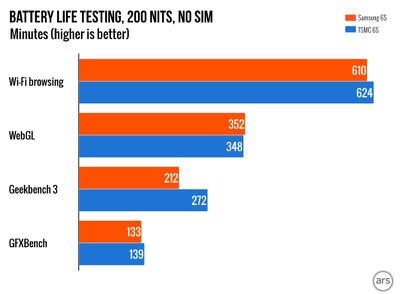 So there are definitely circumstances under which the TSMC phone will last longer than the Samsung phone, but it's not a universal problem. A Samsung chip that's mostly idling or even one under modest CPU and GPU load, though, is going to behave in just about the same way as a TSMC chip. And the kinds of CPU-intensive work that the Samsung chip seems to struggle with just aren't that common on smartphones. Most of the time, iPhone 6S battery life should be similar no matter which chip your phone is using.

According to Apple, the comparison of just two devices is too small of a sample size to make meaningful predictions about the performance between iPhones with Samsung chips and those with TSMC chips. As Ars points out, no one but Apple has the resources to collect enough data from enough devices to get an accurate picture of performance.

Ars Technica's findings do line up with what Apple says it has seen in both lab testing and data gathered from hundreds of thousands of customers. Apple has said the variation between the TSMC and Samsung chips it has observed is "well within its manufacturing tolerances" and is a level of variation that can be seen between devices that have the same chip.

yadmonkey
If anyone is still upset about this, please take a moment to acknowledge how wonderful your life is that you have the energy to get upset over something ultimately so trivial. You do not, and probably never have had, any real problems. Your life is blessed. Someday when you have a real problem, remember to look back at this privileged niggle with your new perspective and reflect on what a whiney little assclown you were.
Score: 52 Votes (Like | Disagree)

iLoveiTunes
jeez...can we put a end to this nonsense ?
Score: 38 Votes (Like | Disagree)

Kissaragi
But will people believe it? Of course not.
Score: 29 Votes (Like | Disagree)

Quick Apple PR payment to ArsTechnica and we get this.

Get your tin foil hat out.

It's not really difficult for anyone to do their own testing and post it, regardless of what ars technical says or does.
Score: 29 Votes (Like | Disagree)

Ocellaris
I don't get why people think this isn't an issue. One chip gets substantially worse battery life when performing heavy workloads. Ars did little other than show the initial testing was accurate and there is a good version and a bad version when dealing with high CPU loads.

It may not be an everyday occurance, however I certainly don't want the phone with crap battery life when I am stuck keeping myself busy in an airport or on a trip playing games.

If given the choice between the two devices, would anyone say "Oh it doesn't matter, I'll be fine with inferior device for the next two years". Hell no, everyone would take the one that had slightly better battery life most of the time and substantially better battery life with certain tasks. Apple and developers are only going to make more complex games and apps over the product's lifespan, starting off with the worse of the two chips doesn't seem like a great idea.
Score: 24 Votes (Like | Disagree)
Read All Comments