Apple is now accepting iPhone 6s and iPhone 6s Plus in-store reservations through its Reserve and Pickup program in six European countries where the smartphones are set to launch this Friday, October 9, including Belgium, Italy, Spain, Sweden, Switzerland and the Netherlands. 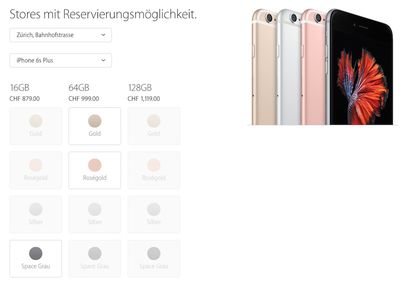 When you arrive at the Apple Store during your 30-minute check-in window, most locations should have a special line for customers with reservations. Only the person named on the reservation can pick up the iPhone -- bring a government-issued photo ID. Reservations are limited to 2 per customer.

Apple plans to launch the iPhone 6s and iPhone 6s Plus in over 130 countries by yearend.

pelles
There’s a small typing error in the Swedish link. It should be /SE/ not /se/ after reserve.cdn-apple.com

beanbaguk
So pissed off! Apple are now charging more in Europe than the UK, thanks to the exchange!
Score: 1 Votes (Like | Disagree)

And yet millions don't mind. Is that amazing or what?

SaxPlayer
I'm very happy for these countries, but would be much happier with my selfish hat on if Apple looked like they might despatch the 6s Plus I ordered here in the UK on 13 September. I know, I know, have patience!
Score: 1 Votes (Like | Disagree)

So pissed off! Apple are now charging more in Europe than the UK, thanks to the exchange!

And even more in Italy thanks to some shady deal with phone providers plus our "we-known-you-will-pirate-music-so-we-will-charge-you-in-advance-even-if-you-aren't-actually-pirating-anything-because-we-want-more-money-from-you" tax on storage memory.

And if things go on like this we will get a new shiny Digital Tax so I don't want to start thinking how much more Apple will charge us o_O
Score: 1 Votes (Like | Disagree)
Read All Comments