Apple Watch to Be Sold at All U.S. Target Stores by October 25

Friday October 2, 2015 6:06 am PDT by Mitchel Broussard
Popular retailer Target this morning announced that the Apple Watch would begin arriving at some of its stores this week, with a plan to have the wearable device available at all of its United States retail locations by October 25. Customers who are interested in buying the device online on Target's website can do so beginning October 18. The move sees Target gearing up for the holiday season, calling Apple's wearable "one of the season’s hottest gift items." 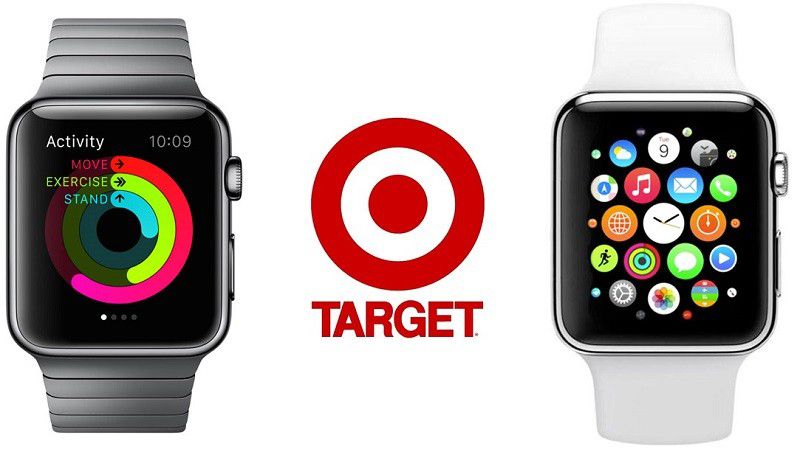 The retailer says it will carry a total of 20 models of the Apple Watch, in both 38mm and 42mm sizes, specifically noting the availability of space gray and rose gold color options. "Select models and bands" will be available for customers at Target's physical locations, but the company notes that an "expanded assortment" of Apple Watch and Apple Watch Sport will be found online. Prices are said to range from $349 to $599, so undoubtedly customers can expect the aluminum and stainless steel options of the Apple Watch at Target stores.

In the beginning, Apple Watch was available exclusively at Apple's own retail and online storefronts -- and some select high-end boutiques -- but now the company has begun expanding the device's reach and availability for customers. In August, Best Buy began selling the wearable, along with some first- and third-party Apple Watch accessories, followed by an expansion into department stores in the United Kingdom, and then the physical locations of carriers like T-Mobile and Sprint.

JeffyTheQuik
This is a pretty good way to save 5% on it when you use the red card at Target.
Rating: 17 Votes

AtheistP3ace
Man Apple Watch is really getting around!!
Rating: 6 Votes

Now it's all about mass market electronics at best buy and target. I think some people at Apple got a major eye-opener last spring. I'm sure Timmy and Co. wish they could forget that posturing. Target and Best Buy are great choices and I'm sure the watch will do well there. It's just so funny that Apple thought otherwise.
Rating: 6 Votes

FSMBP
That’s good. Hopefully more people will be exposed to it….Here’s my deal though.

However, I’m not sure their only watches are all Apple Watches. I bet depending on the occasion, Jony Ive or Tim C. may wear a different watch (mechanical/high-end brand). In fact, coworkers of mine, who own an Apple Watch, sometimes wear their non-smart watch (depending on their outfit or event). I feel like it’s odd Apple entered a market where their product isn’t the main go-to device. Same thing with cars (if they decide to enter that), you know that Eddy Cue will be driving his Ferrari still.

It just seems very different from what has made Apple successful (i.e. enter a market where a known product, like smartphones/tablets/PCs, is lacking and make the best).

rimcrazy
I'm reminded of when digital watches first came out. (Yes I'm dating myself). This is back in the day of thousand dollar Pulsar watches. National Instruments, a semiconductor manufacturer, came out with the first really affordable digital watch. One of their product managers was interviewed by, I believe it was Time magazine, and asked if they were concerned about competition, in particular Timex. To this day I remember the response. The NI person said "..all Timex has to do is sell 2 watches at every distribution point in which they sell products and they will have 50% of the entire market in terms of volume. Now do you think I believe Timex can sell 2 watches at every distribution point? Yes, I'm worried about competition."

So like the Apple Watch or not, in this market getting access to as many distribution points as possible is most likely going to be the key to the ultimate success of the product.

profets
Technically at 'all' of their Canadian stores, lol.

And at none of their Canadian stores.


They don't even have Canadian stores they all went bankrupt

Popeye206
Cool... the more the merrier. Still waiting for v2 before I take the plunge.
Rating: 5 Votes