New Apple TV Only Supports Two Bluetooth Controllers at Once

Apple's fourth-generation Apple TV includes support for a full App Store, making it possible for developers to create games and apps for the device for the first time. A platform like the Apple TV seems well-suited to multiplayer games, but it appears the new Apple TV will only support two Bluetooth controllers at once and three Bluetooth-connected devices total.

Our sister site TouchArcade got in touch with several developers who have Apple TV Dev Kits to test the limits of multiplayer gameplay on the devices, and these developers found they were only able to connect two controllers in addition to the Apple Remote control. 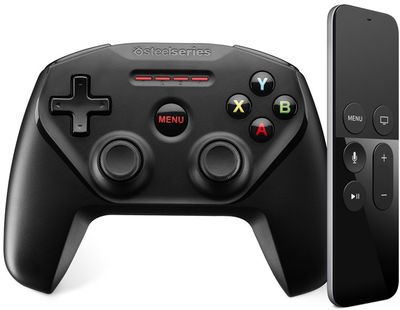 That means that at the current time, the Apple TV supports a total of three players for local gameplay using controllers, which will likely be the preferred method of control for games like first person shooters and platformers. Attempting to connect more than two controllers causes one of the first connected controllers to disconnect, and multiple Made for iPhone (MFi) controllers were tested by various developers.

Well, this is a bit of a bummer. We just got word from one of the developers who were lucky enough to win the Apple TV dev kit lottery (Who we're not naming because we don't want to cause more Apple TV NDA drama!) who raced out and bought a ton of MFi controllers with the hopes of making a 8 player party game.

These hopes were quickly dashed as they realized that the new Apple TV will only connect to two external Bluetooth devices at once, along with the included remote.

The limitations on Bluetooth-connected devices do not extend to the iPhone, which can also be used as a controller in multiplayer games. Implementing iPhone control methods is tricker than simple MFi controller support, however, as it requires developers to build custom iPhone support into apps.

All tvOS games and apps are required to include touch-based controls for the Siri remote, so most titles should work with simple iPhone controls, but many gamers may prefer using MFi controllers. Apple's decision to force developers to build games around touch support has not been a popular one, as it limits games to very basic control schemes.

Apple may be planning to expand the number of controllers supported by the Apple TV ahead of its October launch, but for now, it looks like the device will only support two controllers simultaneously, further limiting the gaming capabilities of the Apple TV.

macduke
Apple doesn't understand gaming, and at this point I'm not sure if they ever will. It's really unfortunate because I feel like this is the closest they've ever gotten and they're still missing the mark in many key ways. The thing should come with one BT MFi controller designed by Apple. Then they should sell Apple designed controllers. The experience is too inconsistent right now. When someone buys this thing, they'll see that controller and understand if they want more controllers to play, they'll need to go buy one like that. That controller is even more limited than the Wii which, even though successful, was pretty much used to only play Wii Sports by the vast majority of owners. I don't think we'll see many companies making games for a platform that is effectively restricted from taking off. Either build in proper game support, or don't have it at all. If it takes more money, then charge what it takes. I still feel like this device is just testing the waters, but the waters will be cold since it's so limited. It's just frustrating because I feel like this platform could be so much more.
Score: 22 Votes (Like | Disagree)

AtheistP3ace
I guess this means no party games. Good thing I have no friends!
Score: 15 Votes (Like | Disagree)

Anyone have a idea on when in October these go in sale?

WordsmithMR
Not surprised... Actually I didn't think it would allow as many as it does. This isn't a console...
Score: 11 Votes (Like | Disagree)
Read All Comments