A9 Chip Manufacturing Split 60/40 Between TSMC and Samsung, Not Segmented by Device Size

Teardowns of the iPhone 6s and 6s Plus have revealed two different A9 chips inside the devices, one created by TSMC and one developed by Samsung, which is slightly smaller in size, having been manufactured on a 14-nanometer process instead of a 16-nanometer process.

There was early some speculation that the chips were divided by model, with the iPhone 6s getting the smaller Samsung chip and the iPhone 6s Plus receiving the larger TSMC chip, but new data collected by an iOS developer suggests that is not the case. 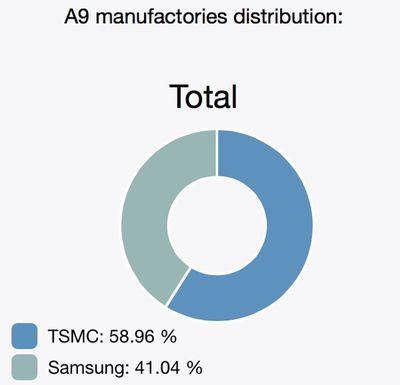 Hiraku Wang has created an app that's able to determine whether an iPhone has a TSMC chip or a Samsung chip, and has shared some data on results gathered from users who have installed his app.

According to results from approximately 2,500 iPhones, there are more TSMC chips than Samsung chips. TSMC chips were found to be installed on 58.96 percent of devices, compared to 41.04 percent for Samsung chips.

At this point in time, there is no evidence that the two chips perform differently, as more extensive testing must be done to determine any performance discrepancies. Though the chips are two different sizes, it's highly unlikely there are going to be performance differences large enough to be noticeable during daily usage.

It is possible for users to check which chip version is installed in their iPhones using Wang's utility, but users should be cautious about installing an app via enterprise certificate from an untrusted developer. We do not recommend MacRumors readers install the app.

As long as my phone is running like it should then I could care less which one I have.

How much COULD you care less?
Score: 41 Votes (Like | Disagree)

ZBoater
We do not recommend Macrumors readers install the app. Oh, and here's the link to the app....
Score: 32 Votes (Like | Disagree)

639051
Ha .. Macrumors you guys are too funny. Quick correction over the original article :

It is possible for users to check which chip version is installed in their iPhones using Wang's tool ('http://demo.hiraku.tw/CPUIdentifier/'), but users should be cautious about installing an app via enterprise certificate from an untrusted developer. We do not recommend MacRumors readers install the app.
Score: 19 Votes (Like | Disagree)

Nunyabinez
I can't believe that with the X Code debacle that just happened people are installing apps outside of the App Store on their phones just to find out which chip they have. You people deserve to be hacked.
Score: 18 Votes (Like | Disagree)

Godzilla71
As long as my phone is running like it should then I couldn't care less which one I have.
Score: 13 Votes (Like | Disagree)

"Samsung has signed a contract to produce 30% to 40% of Apple's 14-nm A9 chip family in 2015, with the remainder of the production load being handled by other Apple supplier Taiwan Semiconductor Manufacturing Company (TSMC), reports ('http://www.digitimes.com/news/a20131218PD207.html')Digitimes."