In just a few short days, the first Apple Music trial periods will begin ending for those who signed up for the trial on June 30, Apple Music's official launch date. As that end date approaches, Apple has updated its Apple Music website to add a series of Guided Tour videos to walk people through using the service.

These Guided Tour videos will show you how to discover new music, hear recommendations from experts, create playlists, connect with artists, and listen to all the music you love on all your devices. Watch now. 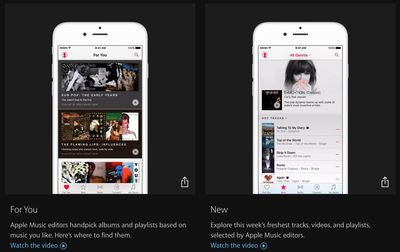 Apple has not yet uploaded its Guided Tour videos for music to YouTube, but it's likely the videos will be added to the channel in the near future. For now, the tutorial videos can be watched directly on Apple's site.

Update: Apple has added all of the Apple Music Guided Tour videos to its YouTube channel. Links to each video are listed below.

Razeus
It wouldn't be needed if that app wasn't such a mess.
Score: 15 Votes (Like | Disagree)

Four oF NINE
Yeah, I'm going to stick with my personally curated iTunes music collection, rather than sign up with a subscription service.

AngerDanger
Gotta love how they're spun as "Guided Tours" instead of tutorial/how-to/explanation videos. It's like we're about to explore some scenic venues instead of being taught how to navigate a clunky UI.
Score: 7 Votes (Like | Disagree)

rizzo41999
I still can't forgive them for what they did to locally stored music. UI is all centered around Apple Music, which I won't be subscribing to.
Score: 7 Votes (Like | Disagree)

To be honest it isn't a big mess, just the New tab because it's cluttered with new songs, top songs, week selection, featured artists and whatnot.

It's a mess because it makes it hard to distinguish between the stuff I owned, vs. downloaded - even the few times I even figured out how to download something. It replaces non-drm'ed files with drm ones and

Everyone else has NOT figured out how to make it easy. Amazon Prime Music is a holy mess, for example.... and it offers LESS music and LESS features, like no music videos. Pandora is fine, but again, it offers LESS.

Amazon Prime is a heck of a lot more straight forward to use than Apple Music. You can't even dispute that. If you want to talk about "features," or "bugs," that's a totally different conversation and Apple Music fails in those departments as well.

You make some good points, but there are some real horror stories about people that signed up for their service and their libraries were deleted.. sure, I have it all on other devices, but it seems like a PIA to fix.

Maybe if they get the bugs worked out

Agree. Some good points, but the problem is Apple Music doesn't work well with existing libraries. It'll either replace your music with DRM subscription music, or it'll break up playlists, or put a "million" duplicates on your library. I had the service for a day and it took me weeks to fix the disaster it caused - I went from have 1,500 playlists to 4,000 because for some reason it decided triplecated (is that a word?) every playlist that I had and willy-nilly decided to break up my original list and add tracks that I never picked. It was a complete mess.

Oh no I totally agree. The software still has some bugs, the uploading of your own songs and messing with your personal music is my only issue with the service. I was just speaking in generalities as far as streaming in general. I'm staying with Google until Apple cleans up the service and keeps your personal collection off limits and accurately uploads the right material.

Messing with your personal library is a pretty BIG issue.

Didn't they have a guided tour for WatchOS, and similar tours for iOS, . . . and OS X

Yes, but I don't understand the point. Other than all of their recent software has been awful messes. I had an Apple Watch for a week and returned it because I couldn't even get it to display the time on a consistent basis. I'm hoping next year when the new watch comes out and further improvements to the software will make it more usable.
Score: 4 Votes (Like | Disagree)
Read All Comments