Less than ten hours before the iPhone 6s and iPhone 6s Plus launch in Japan, at least one Apple Store in the country has begun setting up display models for customers to view. The new iPhones will go on sale in Japan at 8:00 AM local time on Friday just a few hours after the smartphones launch in Australia and New Zealand. 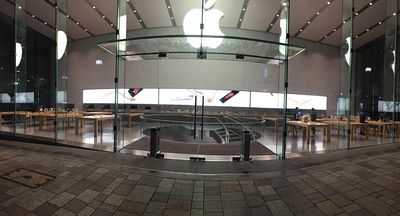 MacRumors reader Shawn DaSilva sent us a trio of photos and a video showing Apple retail employees installing the new iPhones at an Apple Store in Omotesando, Tokyo on Thursday evening. The new iPhones are also advertised on a digital banner spanning the length of the store.

Apple is no longer accepting pre-orders or in-store reservations in time for September 25, leaving lining up at an Apple Store as one of the only options to get a new iPhone on launch day. Apple is not allowing walk-in sales in China, Hong Kong, Japan and four tax-free U.S. states: Oregon, Delaware, New Hampshire and Alaska.


If you plan on waiting it out at an Apple Store, it is highly recommended that you reschedule any important plans tomorrow, as it can take several hours before you reach the front of the queue. In some cases, in-store stock of new iPhones may run out completely before you get a chance to buy one.
Tags: Japan, Tokyo, Apple Store
Related Forum: iPhone
[ 43 comments ]

If you plan on waiting it out at an Apple Store ('https://www.macrumors.com/how-to/purchase-iphone-6s-launch-day-store/'), it is highly recommended that you reschedule any important plans tomorrow, as it can take several hours before you reach the front of the queue. In some cases, in-store stock of new iPhones may run out completely before you get a chance to buy one.

I wouldn't have traded it, though. The experience was fun, the people in line were nice, and the Apple people handed out breakfast.
Score: 3 Votes (Like | Disagree)

I feel like there are not going to be huge lines in any western countries this year. I just don't see it. Not for a pink iPhone.

I think pink means something else in China, so maybe it'll be a hit there.

You think the only reason people line up for a new iPhone is the color of the chassis?
Score: 3 Votes (Like | Disagree)

Leonard1818
No way.... a retail store getting ready for a big product launch?
Score: 3 Votes (Like | Disagree)

But for most people there's no real difference between regular and "s" models this year.

I'm getting one for 2 gigs of ram and 7000 Aluminum. Who else cares about that stuff? Just a bunch of geeks like me, who preorder.

4 and 4s had Steve Jobs and Siri. 5 had bigger screen. 5s had touch ID and gold, a very nice shade that many people liked very much. 6 had big screens. What's the compelling feature this year? 3D touch? Most people hardly even know what that's going to be good for. Even geeks like me might turn it off. Maybe better camera will be a compelling feature but I doubt it. Pink is not compelling, period.

That must have been sarcasm, right? :rolleyes: :D , because all the reviews about 3D Touch have been overwhelmingly positive ranging from 'a very welcome addition' to 'a killer feature ('http://www.trustedreviews.com/opinions/iphone-6s-vs-iphone-6') that will probably show up in other phones sometime in the future'.

As you said, add to that 7000 Alu, the A9/M9 processors, LivePhotos, 2GB Ram, 12 Megapixel camera, 4k video, improved (twice as fast) TouchId, and an additional color choice, there's arguably plenty of reason for people to consider this upgrade.
Score: 2 Votes (Like | Disagree)

darcyf
So people complained when they got rid of lines for the Watch. Now they're complaining that anyone bothers lining up at all for the iPhone.

I'm sure they're not the same people. It's just this is what Apple is up against. Never mind the other half of MacRumors readers who like a little sensibility in their day...
Score: 1 Votes (Like | Disagree)
Read All Comments