Visual designer Adrienne Alpern from San Diego, California is one of the first customers to receive the brand new iPhone 6s, nearly five whole days before the latest smartphone launches in the U.S. and eleven other countries.

Adrienne shared photos of the new iPhone 6s on her Twitter account on Monday afternoon, noting that her pre-order from AT&T arrived much earlier than expected. The all-new iPhone 6s and iPhone 6s Plus officially launch September 25. 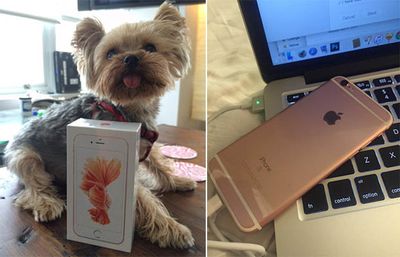 Apple each year requests that couriers like UPS and FedEx hold new iPhone deliveries until the same day the smartphones become available in stores, but a few lucky customers often receive their devices ahead of time due to logistical error.

Adrienne also shared Geekbench 3 screenshots that show the iPhone 6s has a single-core score of 2292 and a multi-core score of 4293. The iPhone 6s is also benchmarked against several other iPhone and iPad models.

Additionally, she shared a short 4K video shot with the iPhone 6s.

iPhone pre-orders in the U.S. can be tracked with FlightAware and UPS.

intofx
people need to learn to rotate their phone when shooting videos.
Score: 73 Votes (Like | Disagree)

chriscrk
Wow and it comes with a cute dog? Apple is really going all out on this S cycle!
Score: 65 Votes (Like | Disagree)

Now wanting a "logistical error" to happen on my pre-order too!

Granted! Your phone is now delayed a month!
Score: 59 Votes (Like | Disagree)

Polaroid
Wish people would get over the vertical video crap.

Its a test video - its easier to just load up camera and shoot rather than rotate or even turn off rotation lock to turn it. No one died. This isn't a professional video.

Get over it sheesh.

Your moaning is worse than the vertical videos.
Score: 17 Votes (Like | Disagree)