Amazon today announced the follow-up to last year's Fire TV streaming device, simply dubbed "The New Amazon Fire TV." The new $99 box is getting a handful of new features, including 4K ultra HD video streaming, the addition of the company's Alexa voice assistant into the operating system, and a processing boost of 75 percent over last year's model. 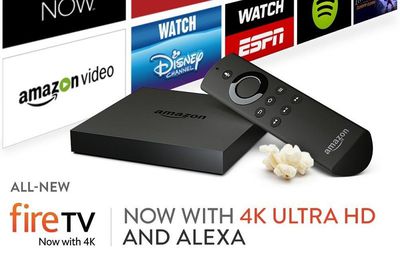 The introduction of Alexa will allow customers to play their music, check on the score of a sporting event, and see how the weather is outside, all while using their voice. Speaking into the Fire TV remote will bring the voice assistant up -- who made her debut in the Amazon Echo last fall -- and she will eventually become more acclimated to each customer's speech patterns, vocabulary, and personal preferences.

In addition to 4K ultra HD streaming, the company promises higher quality basic HD video for everyone who doesn't have a television set that supports 4K settings. Amazon has also introduced expandable storage, allowing customers to increase the 8GB of on-device storage all the way up to 128GB for a variety of apps and games.

“The team has packed an incredible amount of technology and innovation into a tiny package,” said Jeff Bezos, Amazon.com Founder and CEO. “The new Fire TV includes 4K support, more processing power, Alexa integration, the largest selection, and exclusive features—for less than $100. The new Fire TV Stick with Voice Remote brings voice search and Alexa integration for less than $50. These are powerful devices at incredible prices.”

With a launch date of October 5, both bundles of the new Fire TV can be pre-ordered beginning today, with the traditional Amazon Fire TV retailing at $99 and the Amazon Fire TV Gaming Edition going for $139. The company also introduced a new bundle of the Fire TV Stick for $49 that now includes the voice remote, which will begin shipping on October 22.

Corrode
By the time I own a 4K TV (at least a year or two off), I'm sure Apple will have a 4K version of their new Apple TV. I have no problem buying a 1080p Apple TV when it's release in October.
Score: 16 Votes (Like | Disagree)

Before all the new ATV haters get too excited: It doesn't mention specific HDMI version support, and specifically says it's limited to "2160p up to 30fps."

Most likely this does not support HDMI 2.0, and isn't "really" 4K in the sense of taking advantage of the features of a 4K tv other than only the resolution.

Oh stop apologizing for Apple. There is no excuse as to why they shouldn't have included 4K in what is supposed to be "the future of tv". They are stingy just like they have 16GB iPhone and have outdated iPads yet still charge full price for them.
Score: 16 Votes (Like | Disagree)

Jeaz
On the tech side this sure beats the new Apple TV. Guess time will tell how the softwares and content match up.
Score: 13 Votes (Like | Disagree)

oneMadRssn
Before all the new ATV haters get too excited: It doesn't mention specific HDMI version support, and specifically says it's limited to "2160p up to 30fps."

Most likely this does not support HDMI 2.0, and isn't "really" 4K in the sense of taking advantage of the features of a 4K tv other than only the resolution.
Score: 13 Votes (Like | Disagree)

Oh stop apologizing for Apple. There is no excuse as to why they shouldn't have included 4K in what is supposed to be "the future of tv". They are stingy just like they have 16GB iPhone and have outdated iPads yet still charge full price for them.

I'm not apologizing for anyone; I have nothing to apologize for.

There is more to 4K than just 2160p resolution. Had Amazon released a device that supported full HDMI 2.0 spec, with 2160p at 60fps, and one or more of the several competing HDR standards, then that would be a truly 4K-ready streaming device. It isn't though because it doesn't have those things.

I choose to spend my money at the company that releases complete products at the right time, rather than half-baked products just to brag about a lone spec number.
Score: 10 Votes (Like | Disagree)
Read All Comments