Following last week's announcement of the iPhone 6s and iPhone 6s Plus, Tim Cook has been paying unannounced visits to a few Apple Stores to talk with the store's employees and take pictures with customers. During a ride to the company's flagship 5th Avenue location in Manhattan, BuzzFeed got a few minutes with the Apple CEO, where he discussed everything from the privacy concerns of the new "Hey Siri" feature to whether or not iPhone users will ever be able to delete those Apple-created stock apps from their smartphones.

Directly addressing the privacy and safety concerns of "Hey Siri", Cook mentioned that anyone who is fearful of such things can always turn the feature off. Still, he described "the real answer" to be the fact that any information collected by the feature remains on the iPhone, and isn't sent to Apple or anyone else. On the lighter side, when asked about the newest features coming to the next generation iPhones, Cook's favorite appears to be 3D Touch. 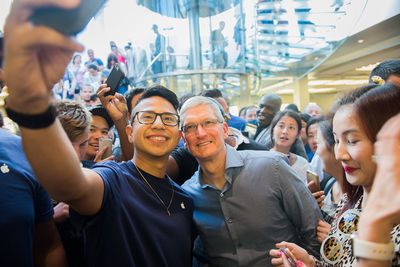 Cook is hot on all of this stuff; he describes Live Photos with near Jobsian hyperbole — “I think Live Photos is a medium that hasn’t existed before. It’s like discovering a new form.” But he’s most excited by 3D Touch. “I personally think 3D Touch is a game changer,” he says. “I find that my efficiency is way up with 3D touch, because I can go through so many emails so quickly. It really does cut out a number of navigational steps to get where you’re going.”

When asked whether the company ever holds back a massive innovation ready for an "S" year, for the next generation (next year's assumed "iPhone 7"), Cook was adamant in stating “As soon as products are ready we’re going to release them. There’s no holding back." Another such innovation, the new iPhone Upgrade Program, is promised by the CEO to be aimed at improving customer experience with an "easier" and "simpler" way for those who want the new iPhone each year.

Thanks in part to the announcement of products like the iPad Pro, Cook also mentions that because "we’re at the point where the iPad does what some people want to do with their PCs," he posits that some people may "never" buy a proper desktop or laptop computer. Still, he believes the Mac is a "key part" of the company's strategy and will continue to be so for the foreseeable future.

One aspect that may be changing in the future, however, is a much-requested way to delete apps like "Stocks" and "Tips" from the iPhone. Cook and the company are aware of the fans' cry for the feature and want to work something out, but it may be more complicated than it seems.

“This is a more complex issue than it first appears,” he says. “There are some apps that are linked to something else on the iPhone. If they were to be removed they might cause issues elsewhere on the phone. There are other apps that aren’t like that. So over time, I think with the ones that aren’t like that, we’ll figure out a way [for you to remove them]. … It’s not that we want to suck up your real estate, we’re not motivated to do that. We want you to be happy. So I recognize that some people want to do this, and it’s something we’re looking at.”

Apple announced the iPhone 6s, iPhone 6s Plus, and iPad Pro last week along with other products like the new Apple TV, and some new information on upcoming updates like iOS 9 and watchOS 2. The new iPhones went up for pre-order over the weekend and are scheduled to launch next week on Friday, September 25. Cook's interview with BuzzFeed in New York today precedes his upcoming appearance on the new Late Show with Stephen Colbert, airing tonight at 11:30 p.m. on CBS.

The full interview between Cook and BuzzFeed is worth a read.

mainstreetmark
How about a switch in Settings to toggle these apps visibility off.

Or, better yet, toggle the entire last page off, which is where they all live.
Score: 47 Votes (Like | Disagree)

santaliqueur
Stick them in a folder and forget them. Or, come online and complain about it for attention.
Score: 33 Votes (Like | Disagree)

Stick them in a folder and forget them. Or, come online and complain about it for attention.

Ignore the comments and forget them. Or, come online and complain about the complaints for even more attention.
Score: 21 Votes (Like | Disagree)

"I think Live Photos is a medium that hasn't existed before. It's like discovering a new form."

Golly, one can only imagine what it would be like to share an animation composed of photographs with others.

thekeyring
Things like the Watch app on iPhone presumably are key to the OS and can't be "deleted" - but I find it hard to believe there's any reason for the app icon other than to raise awareness of the Apple Watch. Stick the app contents under Settings maybe - and have it only appear when there is a paired Watch?
Score: 13 Votes (Like | Disagree)
Read All Comments