Just under a week after Apple's "Hey Siri" event, Tim Cook will appear on the new Late Show with Stephen Colbert on Tuesday, September 15, the late night host revealed on Twitter. Colbert's announcement included a picture of him "using" Siri on his Apple Watch to remind him of the interview. 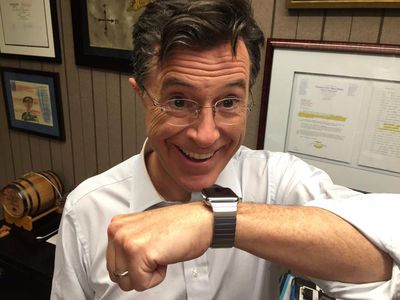 "Siri, put Apple CEO Tim Cook on my calendar for Tuesday, Sept. 15. Oh, and come up with some questions to ask him." pic.twitter.com/mXutum0Bp6 — Stephen Colbert (@StephenAtHome) September 12, 2015

Colbert's Late Show has made an effort to not only speak with celebrities like George Clooney, but also politicians like Vice President Joe Biden and tech CEOs like Tesla's Elon Musk and Uber's Travis Kalanik. Thus far, Colbert's interviews with tech luminaries have seen him ask both pointed questions, like why Uber is pursuing self-driving vehicles if it claims to be creating better jobs for taxi drivers, and sillier ones, like if Musk is a super villain. It's likely Cook's interview will broach Apple's newly announced products: the iPhone 6s and 6s Plus, the new Apple TV and the iPad Pro.

The Late Show with Stephen Colbert airs every weeknight at 11:30 p.m. on CBS, with the show uploading both interviews and extended interviews on its YouTube channel the morning after.

simonmet
Tim Cook has never said anything vaguely interesting. I wouldn't want him as a guest!
Score: 10 Votes (Like | Disagree)

JeffyTheQuik
Should be fun to :apple:Watch!
Score: 5 Votes (Like | Disagree)

JeffyTheQuik
He is very good with another person, as he can play both the straight man and the comic, depending on how the conversation goes. He does have some issues with the monologue, but he also has pretty big shoes to fill.

swingerofbirch
Not a fan of Tim Cook speaking in public as he has nothing new to say. But why should he? He's a COO who's taken over as CEO. He didn't found Apple. He's never worked in engineering or software development. He knows how to squeeze money out of customers and materials. Every time I see him I think he should be hawking Perdue chicken instead of technology products. He doesn't say anything that means anything in interviews.

I remember the days of watching and rewatching keynotes. This last one was like sitting through a business meeting. Incremental updates are fine, but listening to the saccharin fawning over them is just as tiring as it would be if you were in a business meeting with a manager trying to jazz you up about some new company initiative. If they used a few less superlatives and cut the presentation time to a quarter of what it was (easy thing to axe: the Gilt Apple TV app), it would have been fine.

The only moment that seemed slightly real and entertaining was Eddy Cue swaggering out like a brassy New Yorker visiting Las Vegas, with his paunch proudly protruding from his gaudy shirt. But then he started talking.
Score: 4 Votes (Like | Disagree)

chromite
This should be great but it would be better if John Oliver could interview him on HBO.
Score: 4 Votes (Like | Disagree)
Read All Comments