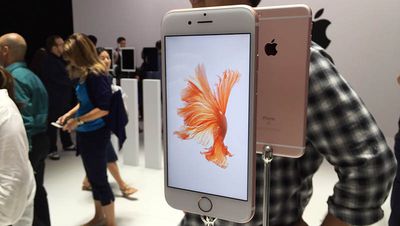 iPhone 6s and iPhone 6s Plus pre-orders begin on Saturday, September 12 at 12:01 AM Pacific ahead of a Friday, September 25 launch in the United States, Australia, Canada, China, France, Germany, Hong Kong, Japan, New Zealand, Puerto Rico, Singapore and the United Kingdom. The new iPhones will be available in over 130 countries by the end of the year.

iPhone 6s and iPhone 6s Plus are powered by an Apple A9 chip and embedded M9 motion coprocessor that deliver up to 70% faster CPU performance and up to 90% faster graphics compared to the A8 chip inside the iPhone 6 and iPhone 6 Plus.


3D Touch on iPhone is similar to Force Touch on Apple Watch, enabling users to make "peek and pop" gestures on the screen to access actionable shortcuts or preview content, such as text messages, flight information, calendar appointments and more. This feature received quite a lot of stage time at Apple's media event and is one of the key features of the iPhone 6s and iPhone 6s Plus.

The smartphones feature an improved 12-megapixel rear-facing iSight camera with 4K video recording and 5-megapixel front-facing FaceTime camera with true tone Retina Flash -- in low light, the front display will flash for a split second instead of traditional LED flash.

iPhone 6s and iPhone 6s Plus also have a second-generation Touch ID fingerprint scanner that is up to two times faster compared to Touch ID on previous iPhones.

The ninth-generation iPhones are crafted from Series 7000 aluminum and come in a new rose gold color, alongside silver, space gray and gold. Otherwise, the handsets look virtually the same as the iPhone 6 and iPhone 6 Plus.

jmh600cbr
Sort of depressing that we already know everything before these events
Score: 15 Votes (Like | Disagree)

****ing seriously, they are not releasing gold with a black face?

Wow, I am in shock. Such a bummer.

Traverse
I took my Apple leather case off my iPhone 6 for the first time in a while and it made me smile. I used my phone for a bit and it still felt new! The novelty never wore off of the iPhone 6 like it did the 4S; I'm still amazed by it's design and how sleek it is.

The iPhone 6S is going to be really great update, but for the first time, I'm not really tempted by it. Those new harder materials are really nice though.
Score: 14 Votes (Like | Disagree)
Read All Comments