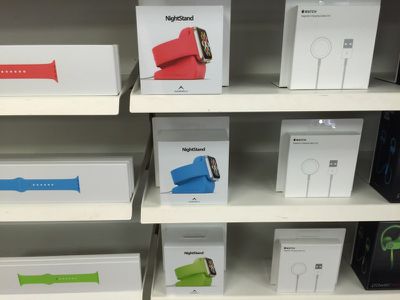 We visited an Apple Store in North Carolina, where the NightStands are on display next to the Apple Watch Sport bands, Apple Watch chargers, and matching Beats headphones.

According to a source that spoke to MacRumors, the NightStand from ElevationLab is the only Apple Watch accessory Apple is offering for now, but additional accessories might start appearing in stores in September. ElevationLab's NightStand is currently only available in retail stores and is not yet being offered online.

Apple's decision to begin offering third-party Apple Watch accessories comes amid a major revamp of its retail stores. As of today, Apple retail stores no longer have iPad "smart signs" that display pricing information and product details next to each product for sale.

Instead, Apple's display products, such as iPhones, iPads, and Macs, now include a dedicated "Pricing" app that users can open up to get pricing information.

In recent months, Apple Stores have been undergoing some significant transformations. Along with the removal of the smart signs to reduce clutter and confusion, Apple has also slimmed down on the number of accessories for a more refined look. In the future, many accessories will also feature Apple-designed packaging.

bbaumgardner22
Personally, I don't think the "pricing" app is easier than the old iPad 2 displays. I really liked the iPad displays. Maybe I'm in the minority on that...
Score: 19 Votes (Like | Disagree)

Akzel
Ugh, so instead of easily accessible information we have to click/tap away to find about prices? I think it's bad for the consumer. :\
Score: 7 Votes (Like | Disagree)

Ugh, so instead of easily accessible information we have to click/tap away to find about prices? I think it's bad for the consumer. :\

I liked the iPad 2 consoles better, also. But there are a couple of things about that. First, I liked them because they were a cool use of tech, and I appreciated the fact that they were able to do it. Second, I read about them on MacRumors when they were first put into play, so I knew what they were. Thus, I was "in the know" when I was at the store, and they didn't confuse me. However, in watching people who were far less technical in the store, and accompanying friends and family to the store I noticed that others didn't often seem completely at ease with them, and either ignored them totally, or started to play with them as if they were a display device. So I could see why Apple would remove them for that reason. I assume they had better research/metrics on it than my anecdotal observations.
Score: 6 Votes (Like | Disagree)

Ugh, so instead of easily accessible information we have to click/tap away to find about prices? I think it's bad for the consumer. :\

The amount of energy it takes to lift my arm, flick out a finger to touch the display an dread what I see is just too much strain on my body.

I feel a class action suit coming on for tapping tunnel syndrome, eye strain and since I have to lift my arm, maybe Tommy John surgery will be needed.
Jeez.
Score: 5 Votes (Like | Disagree)

Personally, I don't think the "pricing" app is easier than the old iPad 2 displays. I really liked the iPad displays. Maybe I'm in the minority on that...

I preferred the iPads as well. There's something very inelegant about opening an app to see pricing information instead of just having it right there.
Score: 4 Votes (Like | Disagree)

$30? Not bad for being sold in the Apple Store. Doesn't beat my much sleeker Spigen aluminum one for $20 though.

Also, it looks like Apple may just continue to stick with contract subsidized pricing despite the carriers phasing them out.

Have you tried Spigen's new Apple Watch stand, the S350? It's only £9.49 and works with Nightstand Mode.
Score: 2 Votes (Like | Disagree)
Read All Comments