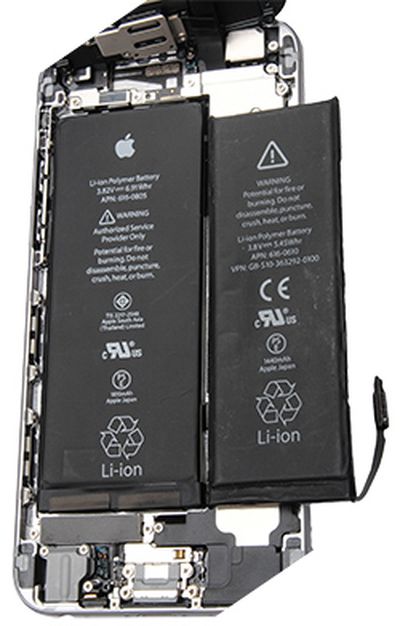 British power technology company Intelligent Energy has developed an iPhone 6 prototype with a built-in fuel cell that supports hydrogen cartridges delivering up to a week's worth of battery life, according to The Telegraph. It also demonstrated a hydrogen-powered MacBook Air.

The patented fuel cell system, reportedly poised for its first major commercial deployment in cell towers across India over the next few weeks, creates electricity based on the chemical reaction of combining hydrogen and oxygen, which produces only small amounts of water vapor and heat as waste.

Intelligent Energy also introduced a hydrogen-powered iPhone charger called Upp based on the same technology last year, but its latest breakthrough has seen it fit the fuel cell portion of the technology alongside an iPhone 6 battery pack without altering the size or shape of the smartphone.

To our knowledge this has never been done before. We have now managed to make a fuel cell so thin we can fit it to the existing chassis without alterations and retaining the rechargeable battery. This is a major step because if you are moving to a new technology you have to give people a path they are comfortable with.

The only cosmetic difference on the iPhone 6 prototype is the addition of rear vents allowing a small amount of water vapor to escape. The Telegraph reports the device it saw at the company's Loughborough, United Kingdom headquarters also had a modified headphone socket for refuelling hydrogen gas, although likely only because it was a prototype.

Intelligent Energy plans to sell a disposable cartridge that will attach to the bottom of a smartphone and provide enough hydrogen-releasing powder "for a week of normal use," and the company's corporate finance chief Mark Lawson-Statham vaguely mentions having a "partner" on board -- speculated to be Apple, although both companies declined to comment as expected.

Nevertheless, the rumours and clues are overwhelming. Apple has a series of patents around fuel cell technology on public record. In recent research on Intelligent Energy, Zeus Capital analyst Dr Tom McColm wrote that he believes it is working closely with Apple.

The iPhone 6 and iPhone 6 Plus are powered by 1,810 mAh and 2,915 mAh lithium-ion batteries respectively.

pavelbure
Apple will take this, shave 1 mm from the product size and reduce battery usage from 1 week to 1 day.
Score: 46 Votes (Like | Disagree)

AngerDanger
I can already see the ad:

DakotaGuy
I'll be waiting on the first class action lawsuit for an exploding fuel cell.
Score: 25 Votes (Like | Disagree)

What if you drop it? Will the hydrogen explode? Small mushroom cloud on the floor?

I really blame incompetent science teachers for comments like this.

People drive around in vehicles with tanks full of much larger amounts of a potentially explosive liquid. These vehicles actually are driven by mixing that liquid with air and triggering mini-explosions. How many people get killed by gasoline explosions each day? And what if you drop a car? Does the gasoline explode? Huge mushroom cloud on the highway?

ArtOfWarfare
How do I recharge, though? If it were as simple as plugging it into the wall as you do with today's rechargable batteries, I'd consider it.

But instead it sounds like you have to refuel these batteries to reuse them. Having to refuel on a weekly basis instead of recharge on a daily basis is a step backwards, not a step forwards, for everyday consumer electronics. The only place refueling on a weekly basis is better is if you're someplace where you won't have daily access to an outlet.

On a related note, I feel like the whole hissing and blowing steam out a vent sounds very steampunk. I'm sure there's some sort of hipster market for a steampunk iPhone.
Score: 18 Votes (Like | Disagree)

And where does the waste go to if this is in an iPhone ?

Did you read? Rear vents for the "small amount of water vapor.."
Score: 14 Votes (Like | Disagree)
Read All Comments

Tuesday October 4, 2022 3:30 am PDT by Hartley Charlton
The European Parliament today voted overwhelmingly in favor of enforcing USB-C as a common charging port across a wide range of consumer electronic devices, including the iPhone and AirPods, by the end of 2024. The proposal, known as a directive, forces all consumer electronics manufacturers who sell their products in Europe to ensure that a wide range of devices feature a USB-C port. This...
Read Full Article • 363 comments

Monday October 3, 2022 2:41 pm PDT by Joe Rossignol
iOS 16 was released to the public three weeks ago with a customizable Lock Screen, the ability to edit iMessages, improvements to Focus modes, and much more. And in the coming months, iPhone and iPad users have even more new features to look forward to. We've rounded up 10 new features coming to the iPhone and iPad later this year, according to Apple. Many of the features are part of iOS...
Read Full Article • 92 comments