Lloyds Bank has sent an email to customers to notify them that it will begin supporting Apple Pay "very soon" for contactless payments with debit and credit cards and in-app purchases. Most transactions will initially be limited to £20 at retailers in the United Kingdom, but some retailers may allow larger purchases. 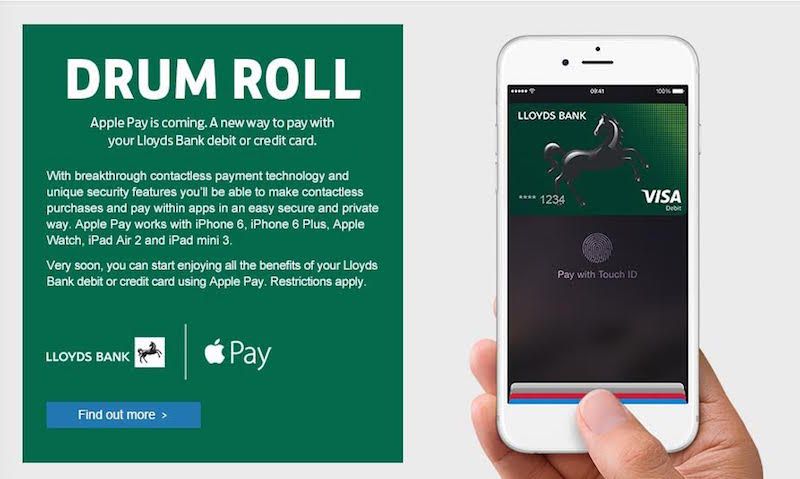 Lloyds Bank has been listed under the "Coming Soon" section on the Apple Pay page in the United Kingdom for quite some time, but the bank has not provided a more specific launch date beyond telling customers it is aiming for "autumn" through its Twitter support account.

Apple Pay launched in the U.K. on July 13 and is accepted at more than 250,000 locations across England, Scotland, Wales and Northern Ireland. Participating banks that have activated the service include First Direct, HSBC, MBNA, Nationwide, NatWest, Royal Bank of Scotland, Santander and Ulster Bank.

Morrisons have ApplePay branding around all their card readers in my local Morrisons, was trying to find out if this meant they'd got rid of the limit, but the cashier didn't know, and I didn't want to pull down the manager to ask out of interest, as I can't actually use it yet.

If a merchant displays the Apple Pay logo, they have up to date contactless terminals and do not have the usual £20 (soon to be £30 limit).

All of the merchants listed on the Apple Pay website (http://www.apple.com/uk/apple-pay/where-to-use-apple-pay/) do not have the limit.

So for example, you can go into your local Apple Store and buy an £999 MacBook with Apple Pay.
Rating: 1 Votes

what's the point of using Apple Pay if you are limited to £20? The amount is very little of practical use for larger purchases. Groceries alone for a weeks worth costs more than that. There's no such limit here.


The £20 limit is a historical limit set on NFC terminals to stop people stealing contactless cards and running amok.

This is increasing to £30 in September.

As terminal software is updated over time, it will allow payments over £20/30 to be used by Apple Pay.
Rating: 1 Votes

I've seen a post on here where someone has used Apple Pay to purchase an Apple Watch in one of their UK stores.

Similarly I would be able to complete said purchase using the Apple Pay feature on the iOS app.

Boots are set to remove the £20/£30 ceiling from November of this year also.


i used apple pay on my watch to buy about £80 worth of accessories in the apple store a couple of weeks ago. glad I have a short email address (only 3 letters long) because getting the emailed receipt was already about 60% of the checkout process.
Rating: 1 Votes

UKPoliticsGuy
Barclays were unavailable for comment ... but offered to sell you a crappy wristband.
Rating: 1 Votes

perkedel
what's the point of using Apple Pay if you are limited to £20? The amount is very little of practical use for larger purchases. Groceries alone for a weeks worth costs more than that. There's no such limit here.
Rating: 1 Votes

timsutcliffe
Excellent. If only Tesco Bank would show some sign of getting on board.
Rating: 1 Votes

Barclays were unavailable for comment ... but offered to sell you a crappy wristband.


I switched from Barclays to First Direct for Apple Pay. Barclays' decision on Apple Pay seems to be a bad move .....
Rating: 1 Votes

samofhim
arg!!! Barclays!! Pull your finger out and catch up.
Rating: 1 Votes
[ Read All Comments ]