Apple today released iOS 8.4.1 to the public, roughly six weeks after releasing iOS 8.4 with the new Apple Music service and one month after first seeding the first iOS 8.4.1 beta to registered developers for testing purposes.

Today's iOS 8.4.1 update is Build 12H321 and can be downloaded over-the-air through the using the Software Update tool in the Settings app on iOS devices. 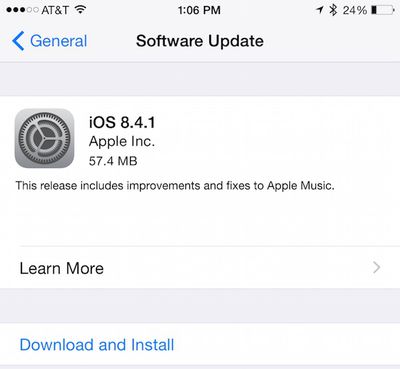 iOS 8.4.1 is a minor update that includes under-the-hood performance improvements, bug fixes, and security updates. Throughout the testing period, no outward-facing changes were discovered in the beta, and Apple's release notes specifically mention only Apple Music improvements and fixes.

This release includes improvements and fixes to Apple Music.

It's likely iOS 8.4.1 will be one of the last updates to the iOS 8 operating system. iOS 9, iOS 8's successor, has been in testing since June and is on track to be released in the fall alongside new iPhones. iOS 9 builds on the features introduced in iOS 8 and adds both new content and underlying performance improvements.

peterdevries
I actually like Apple Music. Keep forgetting to cancel Spotify, but haven't used it in about four weeks.
Score: 27 Votes (Like | Disagree)

That's because iOS 8 in general is a mess, a complete disaster. Welcome to Tim Cook's Apple.

Grow up! It's hardly that bad. iOS 9 is great if u are so deeply concerned.
Score: 10 Votes (Like | Disagree)

Grow up! It's hardly that bad. iOS 9 is great if u are so deeply concerned.

I pay a premium with Apple products so I expect top notch quality. If I want crappy bug ridden software to work with, I'd just use the $220 Moto G Android.
Score: 8 Votes (Like | Disagree)

I bet the bugs I've had since IOS 8.0 / Sept 2014 haven't been fixed yet. But that's ok, just keep fixing the new bugs. Screen orientation working properly on a stock text app I understand is way too much to ask almost a year after release.

I've learned to like the freezing effect of the stock keyboard as well. I consider it a feature you don't even have to turn on: Auto Pissed Off.

I haven't seen these issues. Maybe there's a problem with your device. Have you tried all the logical sensible steps to try and resolve it? or are you one of these people that won't bother and just whine?
Score: 8 Votes (Like | Disagree)
Read All Comments