Apple's sixth OS X 10.11 El Capitan beta, released on Monday, includes a few lines of code that yet again reference the possibility of a forthcoming 4K 21.5-inch Retina iMac, as discovered by Consomac [Google Translate]. A similar occurance happened back in June, when some code in the second OS X El Capitan beta referenced a 4K 21.5-inch iMac screen, but, as yet, Apple hasn't given any word on the veracity of the rumors.

Consomac's research into the code of the new OS X beta found three new files, two of which include screen resolutions that hint at the possible arrival of new 5K 27-inch iMacs, and the other with a 4096×2304 resolution. Like the second El Capitan beta, this code could potentially refer to a 21.5-inch Retina iMac display with 4K resolution coming down the line. Although, as Consomac discovered, an image accompanying the three files points to a design that will largely "remain unchanged" for the new line-up. 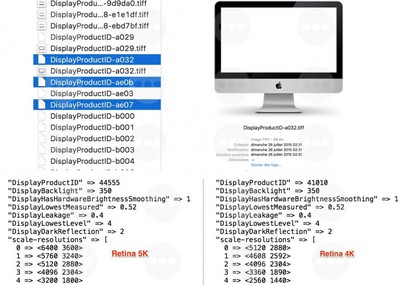 Beginning last October, Apple launched a few updates for the 27-inch iMac with Retina Display, but the rest of the iMac line-up hasn't seen a proper upgrade since September 2013. The major reasoning behind the stalled upgrade cycle is the company waiting for Intel's various desktop components -- including the Broadwell and Skylake processors -- to be available for a more substantial update to Apple's smaller-sized desktop computer line-up.

An update to the 21.5-inch iMac line has been hinted at for a while now, including a rumor just yesterday from KGI Securities analyst Ming-Chi Kuo that pointed to the iMac line gaining a significant boost this quarter. Kuo points to display improvements with greater color saturation thanks to a few new processors, but never references directly the arrival of a retina display for the 21.5-inch iMac line. Still, the timing with back-to-school shopping swinging into gear, and the lengthy update cycle of the 21.5-inch line-up, definitely suggests an impending update for the model sometime soon.

Fusion drive was a neat idea back in 2012, when SSD prices are still sky high. At the price apple is charging for its fusion drives in 2015, I can purchase a high capacity SSD.
The reality is, fusion drive, albeit faster than HDD alone, is still way slower than SSD.

So where is it you're buying 3 TB SSD drives from these days?
Score: 8 Votes (Like | Disagree)

No standard SSD configuration, no buy.

I think you mean: 'No SSD configuration below X Dollars'. How would a cheaper non-SSD option change the value of the SSD option?
Score: 5 Votes (Like | Disagree)

I bought my iMac when this form factor first came out in 2012. Maxed out the memory and opted for the fusion drive. It works great to this day. Even without retina, it is a really good machine. I also found that the fusion drive really did make things work faster and it was totally seamless. Having a multi-tier storage approach is not uncommon in the corporate world and it really should not be a turn-off in the home.

Fusion drive was a neat idea back in 2012, when SSD prices are still sky high. At the price apple is charging for its fusion drives in 2015, I can purchase a high capacity SSD.
The reality is, fusion drive, albeit faster than HDD alone, is still way slower than SSD.
Score: 4 Votes (Like | Disagree)
Read All Comments

Friday June 11, 2021 2:32 pm PDT by Juli Clover
macOS Monterey makes several improvements to password management, positioning iCloud Keychain as an ideal password service to replace third-party services like Lastpass and 1Password. In System Preferences, there's a new "Passwords" section that houses all of your iCloud Keychain logins and passwords so they're easier to get to, edit, and manage. There's a similar Passwords section that's...
Read Full Article • 193 comments