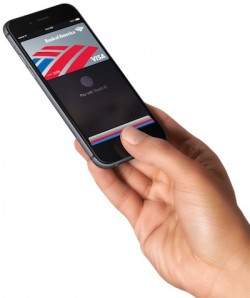 Apple has once again updated its list of participating Apple Pay issuers, adding 46 more banks and credit unions to the list of institutions whose customers can set up credit and/or debit cards with the service. The new additions increase the number of banking institutions in the U.S. supporting Apple Pay to over 425, and just last month the service expanded to the United Kingdom, where most of the country's major banks are already on board.


With most of the largest financial institutions in the U.S. already supporting Apple Pay, most of the recent additions to Apple's list are community banks and credit unions with relatively small numbers of customers. But for those who do bank with these institutions, Apple Pay support will be a welcome addition as merchant support for the contactless payments service continues to grow.

sziehr
Fantastic now if we could just get all those NFC terminals that are in the wild turned on that would be great.
Rating: 6 Votes

sziehr
All my cards are covered. I just got back from kroger they still don't take it. I mean i just went in for some bread why did i have to carry my wallet and stuff with me when i always have my iPhone with me. I know ugh right but still how hard is it to accept NFC when the terminal already has the hardware.
Rating: 3 Votes

iBlazed
Now if only places like Rite-Aid, Walmart, Wawa, and a bunch of other stores would just abandon their little "CurrentC" fantasies and enable their NFC readers that would be most good.
Rating: 3 Votes

Denmac1
Maybe by October, more retailers will come on board. They will be switching to terminals that accept chip cards as that's the date there is a liability shift for cards that are swiped. This could also signal an end for MCX. Discover comes aboard in the fall and Home Depot is to revive NFC when they do the terminal change over.
Rating: 2 Votes

thmshale
Still not my bank or credit card :(
Rating: 2 Votes

2457282
I guess my comment is a rehash of all the others. In the US we need more vendors accepting Apple pay. Adding banks is nice, but useless until I can actually use Apple Pay to purchase. Whole foods one taxi and a few spots here and there is all I have been able to get. I actually bought a phone cover where I can store my credit card due to the lack of apple pay acceptance. Really need to get retailers to pick up their game here.
Rating: 2 Votes

CrAkD
I'm about to leave my bank. This is getting ridiculous they aren't even that small of a chain.
Rating: 2 Votes

69Mustang
Even if every financial institution in the world supports Apple Pay it's not going to mean crap if the retail locations where we spend money aren't supporting it. I'm not sure what can be done to accelerate adoption by retailers, but another list of financial institutions seem kinda meh.
Rating: 2 Votes

Keane16
Apple Pay has been awesome for me since it launched in the UK. It's my favourite tech thing since TouchID on the 5s (and the Apple Watch is on the fast track to being next - partly because of Apple Pay functionality, simple and convenient).
Rating: 1 Votes

It now does not work at Home Depot (it used to). And, 75% of the time I try to use it at Panera it does not work. And the cashier is completely clueless

It seems to have lost a lot of momentum with retailers in the US. And the international rollout has been snail pace
Rating: 1 Votes
[ Read All Comments ]