As expected, Apple did not share specific sales numbers on the Apple Watch during its third quarter earnings call, but Apple CEO Tim Cook did shed some light on how well the Apple Watch did during its first quarter of availability. According to Cook, Apple Watch sales "exceeded expectations" despite supply continuing to trail demand at the end of the quarter. "We feel really great about how we did," he said.

Cook also pointed out that Apple Watch sales during its first nine weeks of availability were higher than sales of the original iPad and iPhone when those devices first became available for sale. June sales, he said, were higher than those in April or May, suggesting reports of falling demand in June were inaccurate. 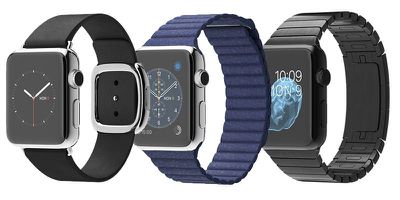 Cook said it "would not be accurate" to look at sequential change or year over year change and assume that number represents the actual Apple Watch revenue because there are a lot of factors at work, including declining iPod and accessory sales, which are also included in the category. In a statement made to the Associated Press, Luca Maestri said something similar, suggesting revenue from the Apple Watch amounted to "well over" the $952 million increase between the two quarters.

Chief Financial Officer Luca Maestri told The Associated Press that revenue from the watch was "well over" that $952 million increase. He said the category also includes revenue from iPods and accessories, whose sales fell in the quarter.

"We beat our internal expectations" for the watch, Maestri said, adding that the number of watches sold in the first nine weeks was greater than the number of iPhones or iPads that the company sold in a comparable period after those products launched.

Aside from analyst estimates that range from an estimated 2.85 million sales to 5.7 million, that rough $1 billion revenue figure that accounts for the difference between Q2 and Q3 is the closest we've come to learning how many Apple Watch devices Apple sold.

Cook went on to say that beyond the "very good news in sales," Apple is excited about how the Apple Watch is positioned for the long term. There are now 8,500 apps available for the device, and the company is poised to release watchOS 2 in the fall, which will bring native apps and performance improvements. "We believe the possibilities for Apple watch are enormous," said Cook.

I just find this hard to believe. Guess most bought the $399 watch. Its a toy after all.

I agree; just like the Mac, iPod, iPhone and iPad were toys to some people.
Score: 23 Votes (Like | Disagree)

nezr
They had low expectations :p
Score: 20 Votes (Like | Disagree)

Tim's statement would be helpful if we knew what the expectations are.

rob25255
Tim's statement would be helpful if we knew what the expectations are.
Score: 16 Votes (Like | Disagree)

coltman75
Especially over the last few weeks, I feel like I've been seeing the watch pop up everywhere. This morning, my barista at Starbucks had one on. I was in a meeting at work yesterday, and four different people had Apple watches on—all stainless steel. Even when I was going for a run, it seems like most people who wear watches while running are wearing Apple watches. I think these are going to be ubiquitous in the next couple years.
Score: 16 Votes (Like | Disagree)
Read All Comments