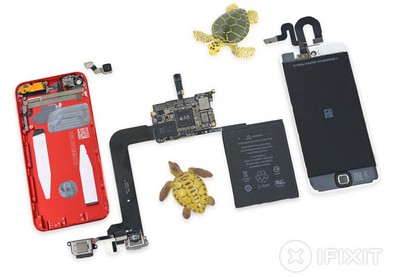 The new iPod touch received a relatively low repairability score of 4 out of 10, with ten being the easiest to repair, due to several components being soldered together, no external screws and ribbon cables that are difficult to remove. iFixit has posted detailed step-by-step teardown instructions for the new iPod touch and sells the required tools and parts for most do-it-yourself repairs on its website.

Ray Brady
Those aren't tortoises. They're turtles. And since the average sea turtle is about 5 feet long, it appears the new iPod Touch has an impressive 140" screen.
Score: 22 Votes (Like | Disagree)

MartinAppleGuy
I'm clearly to childish not to laugh at the tortoise haha
Score: 14 Votes (Like | Disagree)

The A5 in the prior model was clocked at only 800 MHz whereas the A8/M8 in this one is clocked at 1.1 GHz. Plus it also has double the RAM which evidently dings battery life a bit as well.

It's not as simple as that though. Memory already is among some of the least power hungry modules, and hitting the cache that this level is much less taxing than having to hit the HDD (or whatever the main storage is).

I really wish folks would stop using that argument because the implications are much more nuanced than that.
Score: 7 Votes (Like | Disagree)

gpat
Wow. That's way too much. I wanted to get one, but too much battery life is a deal breaker for me. Maybe next time.
Score: 7 Votes (Like | Disagree)

I'm clearly to childish not to laugh at the tortoise haha

I was wondering why Apple would add tortoises. Possibly to support the flash memory?
Score: 6 Votes (Like | Disagree)

kipj77
Looks like there are two collar stays hidden away in the back casing.
Score: 4 Votes (Like | Disagree)
Read All Comments

Friday May 14, 2021 11:52 am PDT by Juli Clover
Following the discontinuation of the iMac Pro, Apple also appears to be discontinuing Space Gray "Magic" accessories that it sold separately alongside the iMac Pro. The iMac Pro was the only Space Gray Mac, and Apple designed special matching accessories for it. The Space Gray Magic Mouse 2, Magic Keyboard, and Magic Trackpad all now say "While supplies last" in small wording at the bottom...
Read Full Article • 290 comments

Saturday May 15, 2021 11:08 am PDT by Juli Clover
Twitter has been working on some kind of subscription service since last summer, and Jane Manchun Wong, who often digs into new features coming in apps, has shared details on just what Twitter is exploring. Twitter's subscription service could be called Twitter Blue, and at the current time, it's priced at $2.99 per month. There will be a "Collections" section that allows users to save and...
Read Full Article • 66 comments