Apple today released the third beta of iOS 9, which has turned out to be the biggest update to the operating system so far. It adds a revamped Music app with access to Apple Music, the News app that was first unveiled at WWDC, a new two-factor authentication system, and several other smaller tweaks, along with the traditional performance improvements and bug fixes.

With today's changes, the beta is feeling faster, more polished, and more full featured. For beta testers and those eager to know what's coming in the OS ahead of its official release, we've rounded up a complete list of all of the new changes introduced in iOS 9 beta 3 below.

News app - Today's beta is the first iOS 9 beta to include Apple's new News app, first announced at WWDC. The news app offers up a curated list of news stories based on each user's preferences and interests. The News app displays specific channels and topics and also supports the addition of RSS feeds from Safari. The News app appears to be available only to U.S. users for the time being. 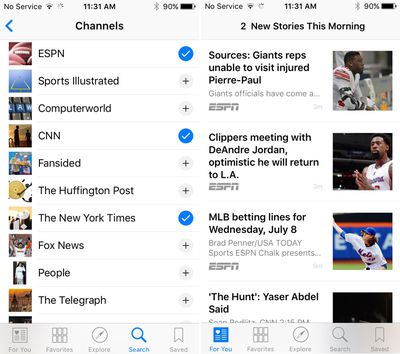 Photo app folders - There are new folders for selfies and screenshots in the Photos app. The "Selfies" folder aggregates all photos captured with the front-facing camera, while the "Screenshots" folder houses all screenshots captured by holding down the power button and home button.

Music settings - There's a new option in the Settings app under "Music" to stream music at the highest quality while using a cellular connection.

Restrictions - In General --> Settings --> Restrictions there's a new logo for Siri & Dictation. There's also a new setting to toggle on/off access to the News app, and the option to turn off Apple Music Connect is gone. People had been using this option to replace Connect with a Playlists tab, but doing so is no longer possible.

Battery Settings - The Battery section of the Settings app has an icon without rounded edges, which may be a mistake. In the app usage portion of the Battery section, there's a new clock icon to represent the list of apps that use the most battery instead of a hamburger icon.

Additional feature updates in iOS 9 beta 3 will be added here as they are discovered. Apple should continue to release regular updates to iOS 9 at two to three week intervals throughout the beta testing period to bring minor performance boosts and changes ahead of the operating system's official launch. iOS 9 is expected to be released to the public in the fall, but a public beta test will come first and is expected in the near future.

Wow Fox News is included in the News app? I never thought Apple would have allowed that. :D

Good. At least I can avoid getting spoon fed all of the CNN liberal garbage.
Score: 27 Votes (Like | Disagree)

GoneDrinkin
There should be a private photo album option. One that requires a password, so when you hand someone your phone to check out some photos... they won't accidentally scar themselves for life! :p
Score: 20 Votes (Like | Disagree)

WB2Colorado
There needs to be a "Saved Pictures" folder that separate from the Camera Roll for pictures saved from the Internet. I'm tired of pictures I've saved from Safari being saved in the CAMERA ROLL.
Score: 14 Votes (Like | Disagree)

mook101
Not gonna lie...Screenshot folder is a WIN for me...I take tons of screenshots but have always hated having them in with all my other photos!!!!
Score: 14 Votes (Like | Disagree)

itsdomik
Just making my news feed and I see Android topic... Laughing Cook, well played Apple. I have also noticed when you're uploading a file you'll get new icons.