With the third betas of iOS 9 and OS X 10.11 El Capitan, Apple is introducing a revamped two-factor authentication system, according to both the beta release notes and a detailed support FAQ that outlines the changes. 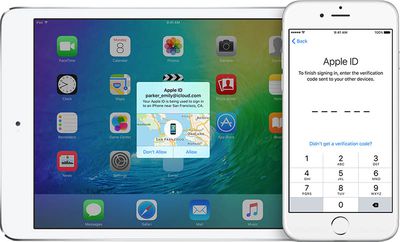 Apple recommends that iOS 9 and OS X El Capitan beta testers using the new two-factor authentication system update all of their devices to iOS 9 or El Capitan for "the best experience." As outlined in the release notes, customers who use two-factor authentication with older devices may be required to put a six-digit verification code at the end of a password instead of using a dedicated verification field.

If you enable two-factor authentication, iTunes purchases on Mac and Windows will require you to append a 6-digit code to the end of your password on every purchase. The 6-digit code will automatically be sent to your iOS 9 or OS X El Capitan devices.

First introduced in March of 2013, two-factor verification is an opt-in system that increases the security of Apple ID accounts. Since its debut, Apple has been working to expand two-factor authentication to cover several different services like iCloud, iMessage, and FaceTime.

Update: An Apple spokesperson told Macworld that the troublesome recovery key feature that has caused people to lose their Apple ID accounts in the past has been removed in the new two-factor authentication system.

With the new authentication system, Apple's customer support team will help users recover their Apple IDs through a recovery process should both trusted devices and phone numbers become inaccessible.

If you can't sign in, reset your password, or receive verification codes, you can regain access to your account by requesting account recovery. Simply provide a verified phone number where you can receive a text message or phone call regarding your account. Apple will review your case and contact you at the number provided when your Apple ID is ready for recovery. The automated message will direct you to iforgot.apple.com to complete the required steps and regain access to your account.

Account recovery will take a few days—or longer—depending on how much information you can provide to verify that you are the account owner. The process is designed to get you back into your account as quickly as possible while denying access to anyone who might be pretending to be you.

As noted by Apple, not all beta testers and developers will have access to the new two-factor authentication system right away, but Apple plans to add additional testers gradually as we get closer to the release of iOS 9 and OS X El Capitan.

christarp
Good, app specific passwords, two factor authentication, etc as it is right now is just confusing as all hell. It took me like 30 minutes to sign into imessage on my mac because of the app specific password crap. It was a PITA to set up.
Score: 8 Votes (Like | Disagree)

This, a thousand time this. Apple being able to provide access to your account means apple holds the master key to unlock your account. This is a blow to us who rely on Apple for privacy as it's allows open season access for the US Govt or clever social engineers.
Score: 8 Votes (Like | Disagree)

Why are they involving humans in recovery process yet again???

Humans can be easily manipulated.

Apple still refuses to use my Google Voice # for authentication purposes. Not real enough for Apple, but I use it daily. Ah well.

I'm guessing they take advantage of email -> text addresses provided by phone carriers. Unfortunately, Google has not made this available for Voice. I'd use it in a ton of places as well.

As for having the ability to have them to let you back into your account in case you're locked out, I hope that isn't a requirement for everyone. As someone who operates rather securely, if I screw something up and lock myself out, I want that data to be completely inaccessible. I do not want Apple retaining a secondary backup key to access my information; only I should have the key. Though, not everyone is comfortable with the potential loss of data, which is why it should be an opt-in feature.
Score: 3 Votes (Like | Disagree)

Did you just post two different articles on macrumors.com that started with the same introduction?!

Recycling at its heights, journalism at its lows.

Those two posts were written simultaneously because they were interrelated and it was at a time when we were doing a million things at once. I didn't mean to word them exactly the same way though, so I apologize for that, and I've changed the beta post.

Sometimes when you write, you skip over whole words and phrases when you read it back to yourself and repetitive bits like that can go entirely under the radar. Sorry for the brain fart there.

By the way, if you see a typo or a title/phrase/word in a post that you have an issue with, you can email us and it'll get our attention faster. It sometimes it takes me awhile to get back to the comments on a post when it's busy. tips at macrumors.com or juli at macrumors.com.
Score: 3 Votes (Like | Disagree)

farewelwilliams
they need to relax on the rate limiting of attempted verification codes.

i called in on Apple Support, they told me to turn off icloud and turn it on. when turning back on, I needed to send a verification code. verification code never got send to my SMS or my Google Voice, never got pushed to my iPad, and then i tried my iPod touch but the verification process said I was attempting too many codes.
Score: 3 Votes (Like | Disagree)
Read All Comments

Monday June 27, 2022 3:38 am PDT by Tim Hardwick
Polish developer Michał Gapiński has released a new and improved version of his "Tesla Android Project" which brings Apple's CarPlay experience to more Tesla vehicles than ever before. According to Gapiński, version 2022.25.1 provides "100% functional CarPlay integration for any Tesla," and comes with several new features and bug fixes. The project now supports DRM video playback so that...
Read Full Article • 154 comments