Re/code has shared the full video and transcript of Apple senior vice president of operations Jeff Williams speaking with journalist Walt Mossberg at Code Conference in Ranchos Palos Verdes last month. Williams reflected on a number of topics during the half-hour session, ranging from the Apple Watch and wearable technology to running Apple's supply chain and overseeing the development of ResearchKit. 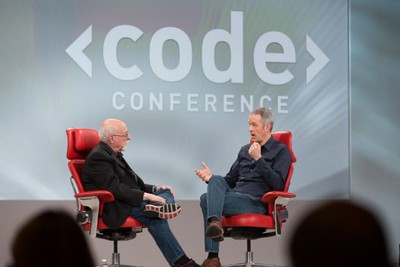 Williams also fielded questions from the audience about the changing need for physical storage and processing power on an iPhone, health-related monitoring systems on the Apple Watch, entering new product categories such as the car, vertical integration within Apple and the company's responsibility to advancing technologies and bringing jobs to the United States as a U.S. corporation.


Williams confirmed at the time that native Apple Watch apps will be available this fall through the WatchOS 2 SDK, providing developers with access to the wrist-worn device's Taptic Engine, Digital Crown, accelerometer, heart rate sensor, speaker and microphone. He also said Apple Watch sales are "fantastic," but neglected to provide any specific sales figures beyond saying "demand divided by supply is greater than one."
Tags: Jeff Williams, Code Conference, Re/code
[ 35 comments ]

Benjamin Frost
He didn't say that sales of the Apple Watch are 'fantastic'.

As we haven't, it is logical to deduce that sales have been bad. The only question is how bad: Newton bad or Apple TV bad?
Score: 6 Votes (Like | Disagree)

this guy is responsible for a launch fiasco of the new MacBook?

It's NOT a fiasco. Yet another great product that's worth the wait. We have a one month wait and don't mind at all.
Score: 2 Votes (Like | Disagree)

If you compare the numbers to any other smart watch in existence, then the numbers are fantastic. There is no doubt to that, so why are you trying to say that the sales have been bad?

Tim Cook specifically said that Apple would NOT talk about Apple Watch sales. This was over 6 months ago. So, Apple is being true to their word. If Apple DID talk about sales now, would you criticize what Tim Cook said about not talking about sale figures? I bet you would.

Unless you have real numbers (and not projections from analysts), then it's as valid to say it's a fiasco as it is to say it's a success.

I still have to see one in the wild in Paris. However I do know a few people who bought one.
Score: 2 Votes (Like | Disagree)

Piggie
Did any single person on these forums, ever expect anyone at Apple to come on stage and say anything other than the Sales have been greater than even they had hoped for?

This is standard Apple PR stuff, it does not matter how many they sell, they will publicly say they are selling better than they hoped.

I mean, be honest, what else would anyone here ever expect Anyone from Apple to publicly say?
Score: 1 Votes (Like | Disagree)
Read All Comments