Apple plans to charge between $9.99 and $14.99 per month for its upcoming on-demand Apple Music service, with 58 percent of its subscription revenues going to record labels. For every $9.99 Apple collects from subscribers in the United States, it will pay out $5.80 to labels. Additionally, Apple pays approximately 12 percent to publishers and/or songwriters, leaving the company with somewhere around 30 percent of the revenue from the Apple Music service.

The figures come from a leaked document shared by Digital Music News earlier this week. In its article, Digital Music News erroneously suggested Apple was paying less to music labels than other streaming music services like Spotify (after failing to take into account the publisher's fee), but as it turns out, the 70 percent that Apple pays out to rights holders is on par with the industry standard. 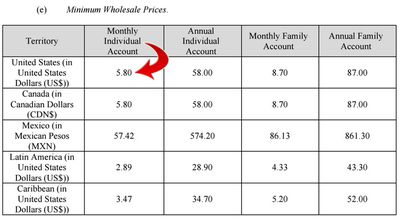 In some circumstances, the fees provided to rights holders can vary, such as when student accounts are involved or when the Apple Music service is provided through a third-party service like Google Play or bundled into a carrier package. During Apple's three-month free trial period that it provides to all subscribers, it is not required to pay any fees to rights holders.

Profit sharing and value concerns often cause a lot of tension between streaming music services, record labels, artists, and other rights holders. Many artists have complained about the low fees they receive from streaming music services, primarily those with free streaming tiers. Taylor Swift famously pulled all of her music from Spotify last year, claiming that by offering music for free, Spotify was undervaluing her work.

With Beats Music and Rhapsody you have to pay for a premium package in order to access my albums. And that places a perception of value on what I've created. On Spotify, they don't have any settings, or any kind of qualifications for who gets what music. I think that people should feel that there is a value to what musicians have created, and that's that.

Apple does not offer a free ad-supported tier for its on-demand streaming music service, choosing to supplement instead with an accompanying radio service. Apple has even allegedly urged record labels to cease offering deals to services that do offer free ad-supported listening tiers, like Spotify and YouTube.

Apple's focus on paid-only music is unsurprising, given the current state of the streaming music industry. Spotify recently announced 75 million users and 20 million paid subscribers, but Spotify continues to operate at a loss. With more than 800 million iTunes accounts with credit cards attached at its disposal, Apple Music could quickly become one of the most profitable streaming services, as long as Apple can draw in customers.

Reason077
How long before record labels are irrelevant?

Artists and publishing companies must be looking at that 58% cut the labels are getting and wondering why they don't just go direct to Apple and Spotify to distribute their content.
Score: 23 Votes (Like | Disagree)

Lets get one thing clear; the true purpose of Apple Music in the long term, as amicable it may be to persist in wanting to be the leader of music services (remember Ping?), is for Apple to have a world-wide radio broadcast system. And in this sense they've already won, easily: Up the date, to the second broadcasting alongside every single other person that has an iOS device.

The music streaming stuff is just a revenue stream for Apple; the channel to communicate with everyone, in real time is the real goal and honestly everyone is already a part of it.

This is the new world. Welcome. :apple:

I really could give a rats ass about hearing someone babbling inanely from LA, NY or London. If I listen to the radio I want local content, news and things that are relevant around me. I even listen to local music talent that would never show up on Apple Radio. On my iPhone I don't need a person to announce a song or boil down important global issues into trite single liners. Not even sure what a global DJ is going to say?

Just play music and shut up, I don't need to pay money to hear someone tell me what song played. Personally I think Apple's "Global Radio" is a contrivance of a bygone area.
Score: 11 Votes (Like | Disagree)

Artists will soon be able to, as part of the connect feature of AM.

If you think Apple Music will have the effect of mitigating label market power, you're going to have a bad time.
Score: 9 Votes (Like | Disagree)

farewelwilliams
but how will Kanye afford another car?
Score: 9 Votes (Like | Disagree)

How long before record labels are irrelevant? And artists/publishing companies go directly to companies like Apple and Spotify to distribute their content?

Artists will soon be able to, as part of the connect feature of AM.
Score: 6 Votes (Like | Disagree)

I really could give a rats ass about hearing someone babbling inanely from LA, NY or London. If I listen to the radio I want local content, news and things that are relevant around me. I even listen to local music talent that would never show up on Apple Radio. On my iPhone I don't need a person to announce a song or boil down important global issues into trite single liners. Not even sure what a global DJ is going to say?

Just play music and shut up, I don't need to pay money to hear someone tell me what song played. Personally I think Apple's "Global Radio" is a contrivance of a bygone area.

Yes, yes and yes. And if I want to listen to radio I just pull up my TuneIn app and I have access to 40K radio stations, including all the BBC Radio stations that Beats 1 is mimicking.
Score: 6 Votes (Like | Disagree)
Read All Comments