Apple today updated the Apple TV to re-add the Events Channel, where the company plans to broadcast the Worldwide Developers Conference keynote on Monday, June 8. "Tune in at 10:00 AM (Local Time) on June 8 to watch this event live," reads the channel. 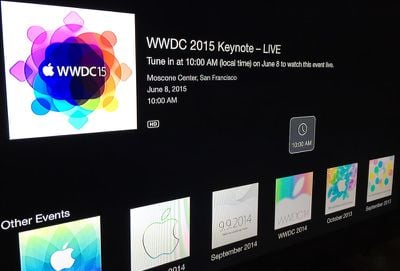 Apple has not yet updated its Events website, but it's likely the company will provide a live stream of the keynote on the website for users who are using Macs and iOS devices. As always, MacRumors will also provide live coverage of the event both on MacRumors.com and through the MacRumorsLive Twitter account.

This year's WWDC keynote event promises to be an exciting one, with Apple expected to debut a new streaming music service, a revamped version of iTunes Radio, an updated Apple TV set-top box, and iOS 9 and OS X 11. New features and updates to Apple Pay and HomeKit may also be announced, but as we learned earlier today, the company's much-rumored subscription television service will not make an appearance.

Update: Apple is now also advertising the live stream on its website.

ghost187
I got Google translate ready so the Chinese lady won't ruin it for me again☺.
Score: 22 Votes (Like | Disagree)

farewelwilliams
my iphone 6 is ready to be slower
Score: 16 Votes (Like | Disagree)

jarrodg
I'll be up at sparrow's fart for this in Sydney with coffee or 2 in hand. I just hope Apple have their **** together this time .. No lag or no foreign language.
Score: 7 Votes (Like | Disagree)

I got Google translate ready so the Chinese lady won't ruin it for me again☺.

Or we could get this for half the event... :D 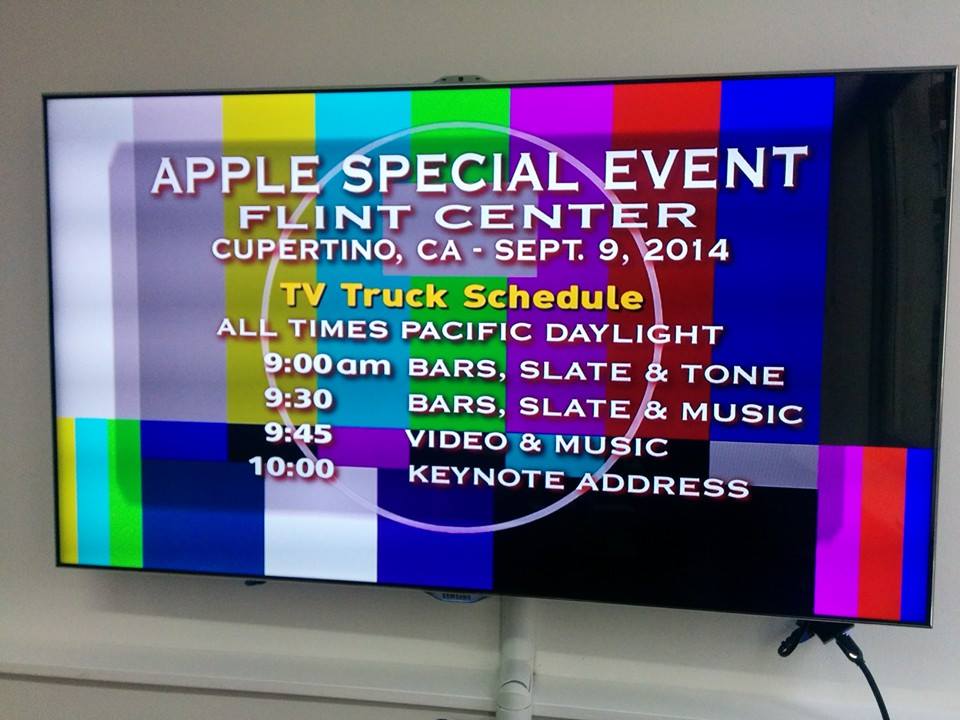 Remember when Sony was cool and every gadget they made people were like crazy for get it! Sony was a great company, it was part of a generation, my friends identify with it. "you need to hear it on my Sony walkman, man.. sounds way better" then... BOOM! Sony became a cold business. Boring, I don't give a d... kind of company and now its just a company right there in the corner... a type of "If I need it and it's cheap I buy it" company... Sad, right?

Well I'm starting to feel the same about Apple. I was so in love with Apple.... now I just buy stuff I need to work with but not to have fun with... get it? It's like a "If I have the money I buy that if not whatever" kind of company.

Next Apple TV will be like the Apple Watch... not that magical. Exactly.

Interesting about Sony. I used to buy all Sony things, Sony camera, video camera, TV (3 actually), Sony walkmans, MD player.
I don't think Sony is cold anymore. Their stuff is excellent, Experia phones are very nice, in Blurays and Playstations they have a clear winner, don't know about their TV but seems OK, Vaio was a very good notebook line (I had 3 Vaios), on PC side I would consider only Vaio and Sharp (Mebius). Sony has now great camera business and actually are a strong competitor to Nikon and Canon, Sony's headphones are very good and bought still. It seems that the company has a good line of bluetooth speakers (don't have). As for Apple, I have a lot of their stuff, and it really works (well, software glitches do exist, especially with iCloud).

Having said that, Apple does the best notebooks, tablets, smartphones and smartwatches in the world. Their TV line (Apple TV) is also fine and actually very good. Their headphones are improving; I didn't buy any desktops from Apple after El Capitano, a great machine. It seems that they had a great bluetooth speaker HiFI which now sells at premium. I am sure their incomin things like streaming music, streaming Apple Channels, home automation (HomeKit), car software (CarPlay) and others also open exciting possibilities. Very satisfied Apple consumers and looking forward to iPhone 7 :). Just bought my daughter iPad mini 2, she is so happy, that says things.

Their things don't have to be magical, should be just working. Thats what they do best and they have now amazing ecosystem. Their Maps are now much better, I swear by iMovie and Final Cut, Logic and Garageband are great software pieces. Even the Photos - gradually accepting it, not so bad.
Score: 5 Votes (Like | Disagree)
Read All Comments