Apple Maps to Include Transit Directions, Improved Points of Interest Data in iOS 8

Apple is preparing to significantly improve its Maps application in iOS 8, claims a report in 9to5Mac. Apple will slow its work on UI changes and focus instead on improving the underlying infrastructure that powers the application. These data-level changes will make Maps more informative and reliable for iOS users.

The new application will also be injected with new points of interests and new labels to make places such as airports, parks, train stations, bus stops, highways, and freeways easier to find, the sources added. Sources also say that the mapping application’s cartography design has been tweaked to be slightly cleaner and to make streets more visible.

Public transit is another major area that Apple will bring to the iOS 8 version of Maps, tapping into the engineering talent the company has acquired from mapping companies such as HopStop and Embark. The new Maps app likely will allow users to find train, subway and bus information in major U.S. and international cities. These public transit options will be embedded in the maps themselves and in the Directions panel, where they will show up in a new tab next to "Driving" and "Walking." 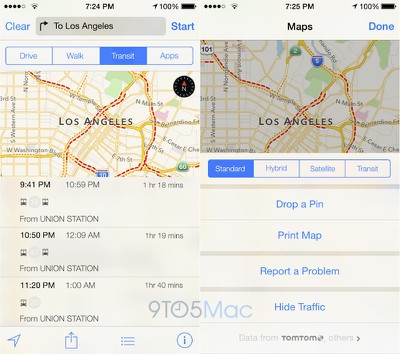 Mockup of iOS 8's transit features
These changes are only the beginning of Apple's proposed plans for its Maps application, as the company is reportedly also working to add indoor mapping views, improved car integration, and augmented reality features in the future.

Apple switched away from a Google-powered mapping solution in 2012 when it introduced its own Maps application alongside iOS 6. Apple's Maps faced extensive criticism at launch when a series of high-profile incidents highlighted embarrassing inaccuracies in mapping data and missing features like street view and transit directions that were available in its competitors' products. Apple CEO Tim Cook even issued a personal apology to iOS owners, promising to improve the app until it lives up to Apple's "incredibly high standard."

AngerDanger
The Apple maps slogan should be "Life is a journey, not a destination". :p
Score: 18 Votes (Like | Disagree)

RubenTheys
Good to hear they're working on POI.

In my experience, Apple Maps is a solid product from the moment you've got the exact address of your destination. Too often I can't find my destination by just searching the name, while Google has no problems whatsoever.

Other than that, Apple maps is a great navigation tool :)
Score: 14 Votes (Like | Disagree)

ng-design
Last night I typed in "Hollywood" while trying to find a map in Los Angeles, and of course Apple Maps took me to Hollywood, FL instead by default.

Is that a first-world problem? Absolutely. But it's little quirks like that which still make it feel like a completely counter-intuitive app. So I hope it does continue to improve.

Edit: I also gave Apple Maps a try while vacationing in San Francisco. I typed in "Golden Gate Bridge" and it gave me directions to a diner. C'mon Apple. You prominently show the GGB in the background of your page for CarPlay, yet can't even take people to it when they type it in?
Score: 13 Votes (Like | Disagree)

Razeus
LOL, the fallacy of updating apps that are tied to the OS only once a year. This is why Apple is STILL behind and why people use alternative apps.
Score: 10 Votes (Like | Disagree)

twochoicestom
In the UK, right now. The business listings are absolutely APPALING for Apple Maps.

It's a deal breaker for me. They need to have the same coverage as Google for it to work out!
Score: 9 Votes (Like | Disagree)

Nimrad
This "failure" will probably ensure that Apple Maps for iOS 8 will be better than it ever could have been if they did OK from the start.
Score: 9 Votes (Like | Disagree)
Read All Comments

Friday July 23, 2021 9:37 am PDT by Juli Clover
Apple is developing an external display that includes an A13 chip with Neural Engine, according to a new rumor from 9to5Mac. The A13 chip with Neural Engine would presumably serve as an eGPU, though details are light at this time. Having a CPU/GPU built into the external display could help Macs deliver high-resolution graphics without using all the resources of the computer's internal chip....
Read Full Article • 226 comments

Thursday July 22, 2021 3:22 pm PDT by Juli Clover
iDOS 2, an app designed to allow users to play classic DOS games, will soon be pulled from the App Store, the app's creator said today. According to iDOS developer Chaoji Li, he tried to submit an iDOS update with bug fixes to the App Store, but was told that the update was rejected because it violated the 2.5.2 App Store guideline that says apps cannot install or launch executable code.Durin...
Read Full Article • 265 comments