Apple's new 15-inch Retina MacBook Pro, unveiled on Tuesday, didn't include a processor upgrade due to Broadwell delays, but it did get a Force Touch trackpad and one other major improvement -- new PCIe-based flash storage that Apple says is 2.5 times faster than the flash storage in previous-generation machines, with throughput up to 2GB/s.

In benchmark testing conducted by French site MacGeneration [Google Translate], the entry-level 2.2GHz 15-inch Retina MacBook Pro with 16GB RAM and 256GB of storage lived up to Apple's claims, demonstrating impressive read/write speeds that topped out at 2GB/s and 1.25GB/s, respectively, in QuickBench 4.0. 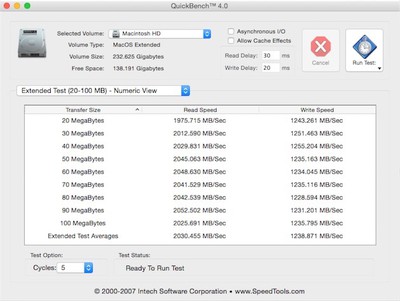 At speeds that reach 2GB/s throughput, the 15-inch Retina MacBook Pro has the fastest storage of any of Apple's notebooks. It took 14 seconds to transfer an 8.76GB file to the machine, compared to 32 seconds for the slower Retina MacBook. With small files, read/write speeds exceed a gigabyte per second.

Like the 2015 13-inch Retina MacBook Pro and 13-inch MacBook Air, the revamped 15-inch Retina MacBook Pro uses a solid state drive manufactured by Samsung. As noted by MacGeneration, it does not use the faster NVM Express SSD protocol that the 13-inch model was updated to, suggesting future machines could see even greater performance improvements with a swap to the next-generation protocol and with continued leaps in SSD technology.

Apple's 15-inch Retina MacBook Pro is available from the online Apple Store at prices that start at $1,999. The notebooks continue to use Haswell processors, but should see performance boosts due to the faster solid state drives.

dannys1
:eek::eek: 2000MB/s read, thats utter insanity?! There isn't a M.2 SSD on the market that i've seen do that and Apple haven't even barely uttered a word about it!

A lot of my work involves copying files from one Mac to another, this is reason enough for me to get the 1TB version, it'll more than saturate the Thunderbolt 2 connection which just about reaches 1400MB/s

If only they'd popped this into the Retina iMacs at the same time. I'm more interested in SSD speed than processor increases to be honest, day to day speed is far more affected by drive reading and write - it makes me laugh how people on here only consider "faster" to be a more powerful CPU, they probably barely do anything that totally saturates the CPU very often unless they really are doing video encoding.
Score: 31 Votes (Like | Disagree)

Meh. I'd rather they not overcharge for their storage and have it be slower. But oh well. I'll stick with my 2013 MBA for now.

It's not overcharging if it's justified by superior performance.

It's unbelievably fast. Can't conceive how this is a silent update while some useless feature for iOS is introduced in a keynote.

I will still hold out for Skylake and get either a 13" rMBP or the new rMBA if it's introduced (Skylake brings Iris on 15W CPUs).
Score: 23 Votes (Like | Disagree)

Crosscreek
Ok, now give me a quad core processor and these ssd s in a new Mac Mini. :)
Score: 23 Votes (Like | Disagree)

I would rather have half that speed and twice the storage. I currently have a sdd with 1/4 of the speed, there has never been a time where it thought "I wish this was faster".


That's probably because you do very basic tasks. I need all the speed I can get. I do a ton of movie editing and a fast CPU and fast storage is extremely important.
Score: 14 Votes (Like | Disagree)
Read All Comments