Apple has quietly introduced support for the next generation NVM Express (NVMe) interface to SSD Flash drives in their latest OS X 10.10.3 update as well as in the new Retina MacBook which was released on April 10th. 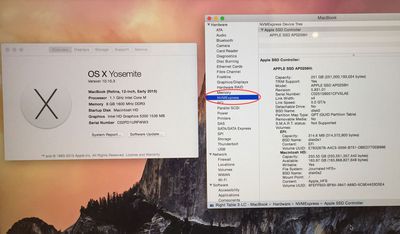 AHCI (Advanced Host Controller Interface) dates back to 2004 and was designed with hard drives in mind. While that doesn't rule out SSDs, AHCI is more optimized for high latency rotating media than low latency non-volatile storage. As a result AHCI can't take full advantage of SSDs and since the future is in non-volatile storage (like NAND and MRAM), the industry had to develop a software interface that abolishes the limits of AHCI.

The result is NVMe, short for Non-Volatile Memory Express.

The new protocol is not to be confused with the underlying hardware that connects the SSD to Apple's notebooks. Apple has already upgraded the physical interface to the much faster PCIe connectors a number of years ago.

Going into the future, NVMe will allow Apple's hardware to take further advantage of the performance of SSDs as well as improve battery life with less time spent transferring data. Intel expects NVMe to also be coming to tablets and phones in the near future.


but in this case they didn't? they just implemented existing techniques
Score: 12 Votes (Like | Disagree)


Not even close, just because YOU can't afford it doesn't mean it's not viable for everyone else.
Score: 10 Votes (Like | Disagree)

As it is software, I hope it will come to existing hardware in an OS update.


Pretty sure this requires a new controller chip too. So no retrograde upgrades.

Another nail on the HDD cofin.

I have no idea why deviant's statement was even the least bit controversial... He was responding to the idea that HDDs are dying out. They aren't.

SSDs are great for pulling in small amounts of data quickly, but they are incredibly expensive for bulk storage. If accessing a particular block of data is a significant fraction of system time, SSD is the right place for it. If it's only accessed occasionally, HDD is the right place.

Flash is getting cheaper, but our appetite for data is growing rapidly as well.

The trend we're seeing is to put SSDs in portable devices, and push bulk storage out to secondary rotating media or, more commonly now, the cloud. The cloud is entirely driven by rotating media.

So no, HDDs aren't dying. They're just less visible to most people.
Score: 7 Votes (Like | Disagree)

Intelligent
I don't even know what "NVM Express" is.
Score: 7 Votes (Like | Disagree)

Yeah, cause using a 50TB NAS is definitely common amongst Mac users...

SSD is progressively killing HDD for both system and storage. Most people don't deal with NAS or external storage in general. The few that do rarely store anywhere near 50TB of content.

A lot of people used to buy laptops with small SSDs (128/256GB) and buy an external HDD for file storage, but that was only because stuff like a 1TB SSD was prohibitively expensive, not because HDDs were somehow better at storing content. Now that SSD prices are getting lower, people won't go through the hassle of plugging external HDDs anymore.

HDDs will of course remain common for stuff like servers, but as far as consumer technology is concerned, they're effectively dying. Your comment feels like it's from 6-7 years ago.
Score: 6 Votes (Like | Disagree)
Read All Comments