Since the Apple Watch was released on April 24, several teardowns from iFixit, Chipworks, and ABI Research have divulged information on the inner workings of the device, detailing everything from battery capacity to the manufacturers who created the miniaturized parts for the device.

A report last week took a deep look at the S1 package that runs the Apple Watch, pointing towards 512MB of RAM, a Broadcom Wi-Fi chip, an accelerometer/gyrometer from STMicroelectronics, and today further investigation from Chipworks (via Ars Technica) has revealed 30 individual components inside the 26mm x 28mm S1 package, a feat Chipworks calls "quite an accomplishment." 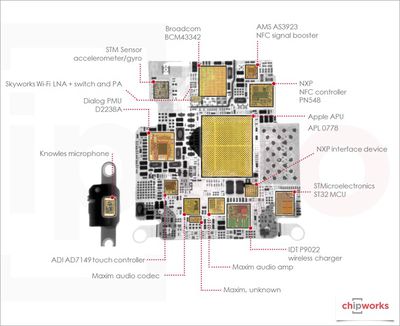 Apple and/or their suppliers have designed and manufactured a 26 mm x 28 mm package that is very unique. Let's consider its construction for a moment. We have a common motherboard to which all of the components (wafer scale packages, PoPs, BGAs, etc.) have been attached. The entire motherboard, with all of its components, is then overmolded with a packaging compound containing silica or alumina spheres suspended in a resin. We see this same type of material in conventional IC packaging, but we have never observed this being used over a 26 mm x 28 mm motherboard.

Among the more interesting discoveries Chipworks has made is the manufacturing process for the APL0778 application processor (CPU/GPU) on the S1. It was made with Samsung's 28 nanometer LP process, which, as Ars Technica points out, is no longer cutting edge technology. A 28-nanometer processor was also used in the iPhone 5s, while the iPhone 6 and 6 Plus used 20-nanometer A8 processors.

A 28-nanometer chip in the current-generation Apple Watch suggests Apple could size down to a newer process in future devices, bringing a jump in performance alongside a reduction in space to make room for additional components. Samsung's chip technology has progressed to a 14-nanometer process, which we may see in the next-generation iPhone, among other products.

In short, the use of a 28-nanometer processor suggests there's a lot of room for improvement when it comes to processing power in future Apple Watch devices. Though the Apple Watch has only been available for two weeks, we've already heard some rumors about the next version. According to reports, health sensors that did not make it into the first-generation device may be added to the second-generation version, perhaps allowing it to track health-related metrics like stress levels, blood pressure, and oxygen levels.

We've also seen rumors suggesting the first update to the Apple Watch will come in the form of additional casing options, perhaps later this year. A second-generation device with upgraded internals is not expected until 2016.

I hope mine has the LG one!

Why? Whats wrong with Samsung chips? They are pretty good as far as I know.

Just blind hate is not good.
Score: 14 Votes (Like | Disagree)

Sandstorm
Every Apple Watch has a little bit of Samsung in it. Lovely! :)
Score: 10 Votes (Like | Disagree)

callea
Apple Watch CPU has an Apple designed Cpu.
So it's an APPLE CPU non a Samsung CPU.
The title is wrong.

Samsung is only the manufacturer.
Score: 9 Votes (Like | Disagree)