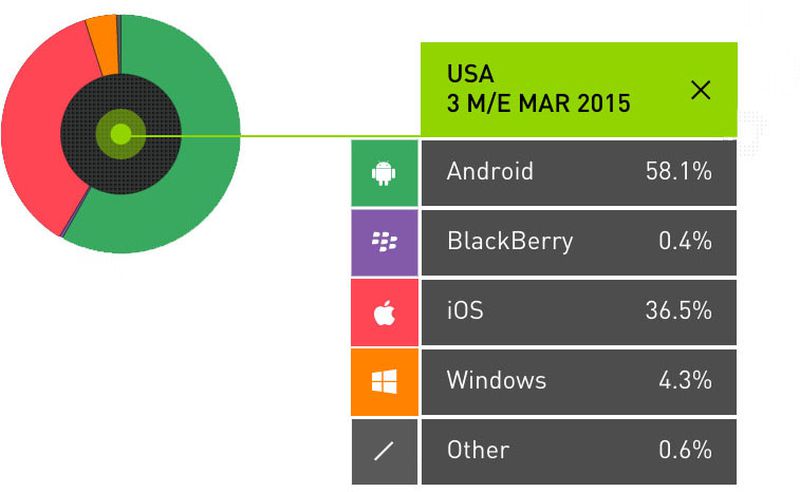 Android continued to have the highest market share among mobile platforms worldwide, as expected, although the continued success of the iPhone 6 and iPhone 6 Plus helped drive iOS adoption higher in the first quarter. Kantar Worldpanel claims that 32.4% of Apple’s new customers in the five big European countries surveyed switched to iOS from Android during the first three months of the year.


The regional breakdown for each platform per country:

Last week, Strategy Analytics released global smartphone data that placed Samsung as the world's largest smartphone maker during the first quarter of 2015. Market research firm IDC then followed up with worldwide tablet data for the quarter a day later, revealing that the iPad continues to be the best-selling device in a declining tablet market.

Savle
This is why Japanese are so smart ...
Score: 8 Votes (Like | Disagree)

bushido
these 7 % in Spain account for stolen iPhones from tourists by the way. just kidding ... or maybe not ;)
Score: 7 Votes (Like | Disagree)

MartinAppleGuy
Really quite amazing that Apple can make one/two phones a year and that competes with the hundreds and thousands of Android phones created year on year.

I would say that all of these countries are in the "emerging market" category. And Apple has not had as much traction in those areas. Clearly cost is a driver there which makes Apple less attractive. Size also matters because often the phone is the only "computer." that someone will have access to.

The new sizes for Apple helps, but only in later years where the older models become available in the secondary market.

Considering that Germany also has an Android marketshare above 70% AND is among the wealthiest nations...that whole argument does loose some traction...
Score: 3 Votes (Like | Disagree)

I have an iPad Mini Retina, an nVidia Shield, and an ASUS Vevo NoteTab 8. As far as I know each one is considered a best in class device for the OS they run. I respect them all and use them all.

When I am working, I trust my iPad implicitly. I teach Information Security. I am a student and write papers. My iPad coupled with a clamshell replaced my laptop last year.

When I am playing (experimenting or games) I use the Android. Its Linux base makes it a powerful ally. I am enjoying it as a console replacement. If Steam used Android as its base, my shield devices would be the ultimate for entertainment.

When I am watching movies I like to watch them on the Asus. Most of my movies are iTunes based. I installed iTunes for Windows and watch on it as opposed to my iPad because the screen format matches the video format.

I would not change any of the three of them.

Market share is irrelevant. I have three different devices. And I enjoy them all. Market share does not change their value.

I have an iPhone though. Android is good for games, and I like it for that. Windows is good for compatibility to enterprise systems, it does a great job. But when I need to depend on a system, and get work done...

It's an Apple every time.
Score: 3 Votes (Like | Disagree)

Android continued to have the highest market share among mobile platforms worldwide, as expected, although the continued success of the iPhone 6 and iPhone 6 Plus helped drive iOS adoption higher in the first quarter.

Kantar Worldpanel claims that 32.4% of Apple's new customers in the five big European countries surveyed switched to iOS from Android during the first three months of the year.

So it looks like the average was about a 3% switch to iOS because of the larger phones. And Kantar says 1/3 of those new customers came from Android. So basically about 1% of Apple's total customers came from ex-Android users. Not a huge number. Maybe 300K people in the UK, for instance.

So I take it that there are almost no wealthy people in Spain, Argentina, Brazil, or Mexico? :D

In the countries where high end phones sell best, such as the USA, buyers often spend $200 or less upfront. In some places, almost nothing. But that doesn't necessarily mean they're poor.

Subsidies are a key factor. Even rich countries avoid the iPhone without them. (See Japan example at bottom.)

Rich or poor, people around the world tend to spend $250 or less upfront for a phone. It's not about the total cost over time, it's the upfront layout that matters.

Another factor is that today, a $250-total-price smartphone is often actually a pretty nice device, with large screen and good capabilities. It isn't necessary to spend $650 for a good smartphone any more.

This is why Japanese are so smart ...

Yes. When the iPhone was first introduced in Japan, it sold extremely poorly. Like most countries without a subsidy, it only got to around 10% of the market.

Then the Japanese carriers started basically giving them away for free with a contract. Instantly iPhone adoption jumped like crazy.
Score: 2 Votes (Like | Disagree)
Read All Comments

Wednesday April 1, 2020 2:45 pm PDT by Juli Clover
Apple in March updated both the MacBook Air and the iPad Pro, and with the iPad Pro increasingly positioned as a computer replacement, we thought we'd compare both new machines to see how they measure up and which one might be a better buy depending on user needs. Subscribe to the MacRumors YouTube channel for more videos. We're comparing the base model 12.9-inch iPad Pro and the base model...
Read Full Article • 96 comments