The latest numbers from Strategy Analytics reveal that Samsung surpassed Apple to reclaim its position as the world's largest smartphone maker in the first quarter of 2015. The two smartphone vendors were previously tied in the fourth quarter of 2014 after Apple matched Samsung with 74.5 million smartphones shipped on the strength of the iPhone 6 and iPhone 6 Plus and busy holiday shopping season. 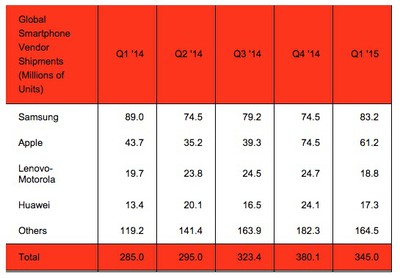 While it was impressive that Apple was able to tie Samsung during the fourth quarter, based on the popularity of the iPhone 6 and iPhone 6 Plus, it was highly probable that Samsung would eventually reclaim its title as number one again. The electronics giant's smartphone lineup is much larger than the iPhone lineup, with at least a half-dozen current-generation devices available compared to only a handful of iPhones.

roadbloc
Some global stats on MR for once. About time. Nothing annoys me more when the articles here seem to assume that US = The World.
Score: 15 Votes (Like | Disagree)

Jsameds
Quantity or marketshare don't mean jack if your profits are falling..
Score: 9 Votes (Like | Disagree)

bushido
not gonna lie the Edge is one sexy phone. unfortunately it is running the wrong OS ;)
Score: 8 Votes (Like | Disagree)

Some global stats on MR for once. About time. Nothing annoys me more when the articles here seem to assume that US = The World.

I'm glad you appreciated the global aspect of this particular story.

I am the editor of this article and actually live in Canada, so I definitely don't try to make our content revolve around the United States. At the same time, I do understand that Apple is an American company and that the United States is their largest market alongside China, so naturally our coverage is going to be skewed towards the U.S. at times.
Score: 7 Votes (Like | Disagree)
Read All Comments

Thursday May 13, 2021 10:32 pm PDT by Sami Fathi
A new rumor suggests that Apple will announce the third-generation AirPods and the recently rumored HiFi, or high-fidelity Apple Music tier, on Tuesday, May 18, via a press release on its website. The new rumor comes from Apple YouTuber Luke Miani who shared the alleged exclusive news with the AppleTrack website. According to the YouTuber, Apple plans to release the next-generation AirPods...
Read Full Article • 160 comments