IHS iSuppli often tears down devices to estimate component costs, and today, the research firm released its report on the Apple Watch, suggesting it has the lowest hardware costs compared to retail price of any Apple product IHS has researched.

The 38mm Apple Watch Sport dissected by IHS was estimated to cost $81.20 when broken down by component. In IHS' estimation, the most expensive component in the Apple Watch is the display (including OLED and Ion-X cover glass), priced at $20.50, followed by the processor on the S1 chip, priced at $10.20. In addition to component costs, IHS adds an estimated $2.50 for manufacturing costs, bringing its total estimate for the Apple Watch's raw cost to $83.70. IHS did not give similar cost breakdowns for the stainless steel or gold Apple Watches, both of which have sapphire cover displays and different casing materials. 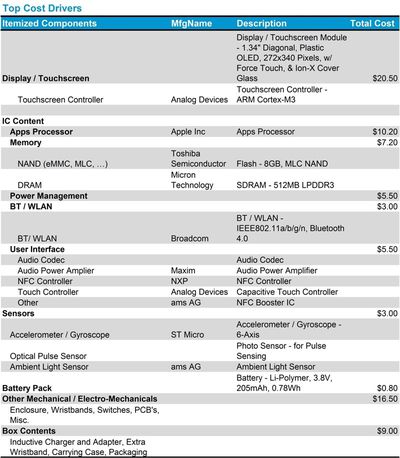 At $83.70, IHS says the hardware costs of the Apple Watch are "only about 24 percent" of the manufacturer's suggested retail price of $349, while other Apple product component costs have ranged from 29 to 38 percent, giving the Apple Watch a higher potential profit margin. During Apple's most recent earnings call, the company announced that Apple Watch profit margins would actually be slimmer than other Apple products, at least during its first quarter of availability.

"It is fairly typical for a first-generation product rollout to have a higher retail price versus hardware cost," said Kevin Keller, senior principal analyst-materials and cost benchmarking services for IHS Technology. "While retail prices always tend to decrease over time, the ratio for the Apple Watch is lower than what we saw for the iPhone 6 Plus and other new Apple products, and could be of great benefit to Apple's bottom line if sales match the interest the Apple Watch has generated."

While these types of cost breakdowns look at the potential expense related to each individual component in a device, they do not take into account other possible expenses related to product creation like research and development, advertising, software, or distribution, making them of little practical use for estimating profit margin.

IHS iSuppli's report also looks at each component in the Apple Watch, many of which have already been well explored in other teardowns from iFixit and Chipworks. It doesn't offer much new information, but it does give an interesting look at the S1 chip in the Apple Watch, and a special coating added for electromagnetic shielding.

"To provide electromagnetic shielding, the encapsulated PCB assembly is further treated with a metalized coating deposited over the surface," Keller added. "This shielding process is used in place of conventional stamped sheet metal shielding, saving a significant amount of space, as well as cutting down slightly on weight."

IHS confirms that the Apple Watch Sport includes 8GB of Toshiba flash memory, 512MB of Micron RAM, and components manufactured by Broadcom, STMicro, Maxim, NXP, and Analog Devices. It also highlights the use of an accelerometer/gyroscope from STMicro instead of Invensense, something that was also pointed out by Chipworks last Friday.

tevion5
To the people who think the watch is over priced as a result of this...try selling bags of cement and piles of wood for the same price as a fully assembled house of identical mass.
Score: 145 Votes (Like | Disagree)

vodouman
Before everyone goes nuts, remember R&D costs need to be recouped.
Score: 34 Votes (Like | Disagree)

applesith
Here come the people who know better and want to tell apple how to run their business. And dictate what their profit should be.

Go start your own company and make stuff with a smaller margin out of the kindness of your heart and let me know how it turns out.
Score: 32 Votes (Like | Disagree)

Locoboof
Wow! That's it?! Are you serious?

When you go to a great steak restaurant, do you complain to your server that you can buy all the meat and veggies for your dinner for less than $20 at the grocery store???

Didn't think so.
Score: 28 Votes (Like | Disagree)
Read All Comments