Ford Working With Apple on CarPlay, But Won't Give Up Control of the Dashboard

Ford has promised to bring CarPlay to its vehicles and is listed as one of Apple's CarPlay partners, but Ford executives say the company will also focus on compatibility with Android and its own Ford SYNC in-car infotainment system to give consumers as much choice as possible. In an interview with Re/code, Ford CTO Raj Nair explained that the company doesn't want people making car choices based on their smartphones.

CTO Raj Nair said part of the reason behind that is ensuring that car buyers have choice. "We want to make sure you are not pushed into a decision on a $40,000 car based on your $200 smartphone," Nair said.

Ford, like the other car makers, also sees its infotainment system, known as SYNC, as a key selling point. "The data shows SYNC has been a significant draw in the showroom," Nair said.

Ford's focus is on SYNC, but the company says that it is planning to support Android Auto and CarPlay and will look to integrate SYNC more closely with both systems. According to Nair, a customer who wants to use Google Maps but listen to Sirius radio using SYNC will be able to do so.

Despite not wanting to hand over control of its in-car infotainment systems to Apple and Google, Ford is eager to embrace new technology. At the meeting with Re/code, Nair was wearing an Apple Watch sporting one of the apps that the Ford team built in a week. A MyFord Mobile research app that links the PHEV Fusion Energi, C-MAX Energi, and Focus BEV cars to the Apple Watch was shown off on Twitter earlier today. 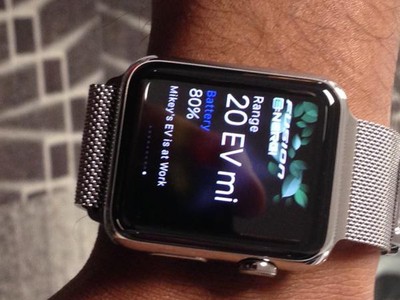 DTphonehome
Are they really this clueless? Sync is abysmal (and I've owned multiple fords). The sooner they "give up control" the better. Apple and Google are infinitely more competent at building user interfaces.
Score: 18 Votes (Like | Disagree)

After buying a Lexus, I could care less about Ford. Who is that?

So you have a little care still left for Ford? How much until you couldn't care less about Ford?
Score: 17 Votes (Like | Disagree)

Competitor showrooms for sure :D
Score: 13 Votes (Like | Disagree)

glhaynes
As a potential customer, I'd have been much more interested in hearing him say "we're giving over the design to Apple."
Score: 9 Votes (Like | Disagree)

happydude
great. i love my ford cars, but HATE sync. it's nothing but a buggy, worthless "infotainment" system. i hope, but am doubtful, sync 3 will be backward compatible with previous generation cars?

besides that, i think it's smart of ford to try to integrate as much as possible across carplay, android whatever, and sync. the $40K car vs. $200 phone is a good point, i just hope they do it well. anxious to see what their results are.
Score: 9 Votes (Like | Disagree)
Read All Comments

Friday June 18, 2021 6:59 am PDT by Sami Fathi
Apple supplier TSMC is preparing to produce 3nm chips in the second half of 2022, and in the coming months, the supplier will begin production of 4nm chips, according to a new report from DigiTimes. Apple had previously booked the initial capacity of TSMC's 4nm chip production for future Macs and more recently ordered TSMC to begin production of the A15 chip for the upcoming iPhone 13,...
Read Full Article • 159 comments