From design mockups to purported case leaks, the much-rumored "iPad Pro" has been steadily building steam for the past few months. Today, several new cases apparently designed for Apple's iPad Pro have been leaked, and one in particular is far more detailed than any previously released (via SonnyDickson.com). 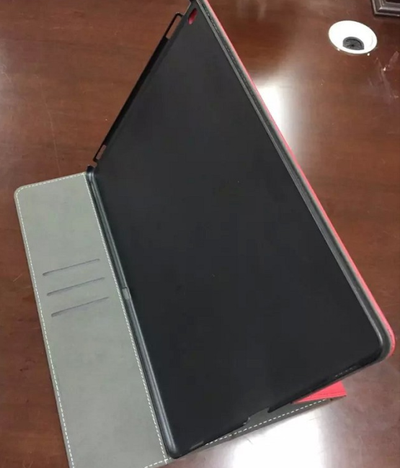 The notable new case leaked today is the first to feature a tri-fold design with a fabric cover, marking a substantial increase in complexity over the simple soft plastic cases seen previously. This increased complexity could be a sign that case manufacturers are increasingly confident in the iPad Pro's design specs and thus willing to invest in more expensive case designs such as this even months ahead of the expected launch.

Recent rumors point towards the iPad Pro's screen measuring between 12.2- and 12.9-inches, with the expected array of cutouts for the volume rockers, back-facing camera, lock button, and a charging port. The newly leaked cases have cutouts for all of these features, including what appear to be speakers at both the top and bottom of the device, in line with previous rumors surrounding the tablet.

The new cases also include the mysterious cutout on the left side of the device. Some previous rumored cases have included the cutout, with rumors variously suggesting it could be for a SIM-card tray on cellular models, a second Lightning port, or perhaps a USB-C port. The Wall Street Journal previously claimed Apple is indeed considering including USB on the iPad Pro.

As is always worth pointing out, these early case designs could still be far off from the actual design of whatever the iPad Pro turns out to be, due to case manufacturers creating molds off of leaked or unsubstantiated design elements. But while there have been some notable misses over the years, case designs have generally proven accurate indicators of upcoming product designs.

The latest rumors peg the iPad Pro as perhaps having a triple-core A8X processor, 2 GB of RAM, Touch ID, and possibly shipping with a first-party Apple manufactured stylus accessory. Release date rumors have fluctuated significantly as Apple as reportedly pushed back its internal timeline several times. The latest rumors suggest production could begin in September, perhaps setting up for an October launch alongside a refresh of the existing iPad lineup.

barkomatic
I can hardly wait to see someone block everyone's view at public events while taking pictures with the iPad pro.
Score: 12 Votes (Like | Disagree)

With the iPad Pro, Apple will release its own external keyboard case based on the ultra-thin keys of the new Retina Macbook. It will be like MS Surface but with real keyboard key action.
Score: 10 Votes (Like | Disagree)

JohnApples
If it to be released in the Fall, why would it come with last year's A8X processor? Especially if it's going to be the "Pro" model of iPads?

I understand this is all based on very vague rumors, but wouldn't it make a lot more sense to speculate that it come with an A9 or A9X chip?
Score: 10 Votes (Like | Disagree)

I hope the "pro" iPad has more than 2gb of ram. Regardless if the critics say it does or doesn't need it.

It only "doesn't need it" until Apple puts it in. Then, it will need it and wishes for any other amount of RAM- including the former RAM standard- will be entirely wrong.

In another thread, a rumored new :apple:TV doesn't need 4K. There's 50 reasons why, which are pretty much the very same reasons why- when gen 2 :apple:TV was the current product- no one needed a 1080p :apple:TV.

In another thread, NFC technology was stupid or a gimmick that 99% don't want or need in a phone. Then, Apple adopts NFC and we want to boycott stores that won't let us pay with Apple Pay.

In another thread, iPads do not need front-facing cameras when iPads were the new thing. There were 50 passionate reasons why such a camera would be stupid in an iPad. Then, Apple rolled out iPad 2 with FaceTime and the biggest reason to upgrade was... can you guess?

<anything not in current Apple hardware for sale> is "not needed" until Apple puts it in. Then it can magically become THE "shut up and take my money" reason to buy the new model.

I'm with you on this particular topic. A multitasking, 64-bit OS with pinched RAM almost doesn't make sense. I hope a "pro" model brings more RAM too. It will probably be priced so that unit cost can't really be an excuse.
Score: 8 Votes (Like | Disagree)

citi
I hope the "pro" iPad has more than 2gb of ram. Regardless if the critics say it does or doesn't need it.
Score: 7 Votes (Like | Disagree)
Read All Comments