Pop artist Romero Britto last week filed a lawsuit against Apple over its "Start Something New" campaign, for using Craig & Karl artwork that allegedly mimics the design style that Britto is famous for. The lawsuit, levied at both Craig & Karl and Apple, accuses the two artists of violating the Britto trade dress and targets Apple because Britto became aware of the copycat art through Apple's recent promotion. 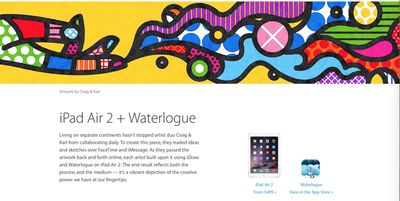 Apple uses a Craig & Karl image featuring a patchwork hand on a bright yellow background on one of the iPads in the graphics used to promote the "Start Something New" campaign, and there's a profile of Craig & Karl on the company's website describing how the image was made on an iPad Air 2 using iOS apps.

Apple also featured the Craig & Karl image heavily in retail stores, leading people to contact Britto with the false impression that he had created the artwork, where he discovered that the two had been making art similar to his own for years.

As with any Apple campaign, the Start Something New Campaign had massive exposure and breathless press coverage, and many of the media profiles prominently featured the Infringing Apple Image. Plaintiff was inundated with reports of the Start Something New campaign and the Infringing Apple Image. These reports ranged from, for example, incorrect congratulations on Mr. Britto's new deal with Apple, to consternation from business partners in potentially collaborative or competing product categories, to inquiries from collectors wanting to know if the image they saw in the Apple store or on the Apple website was by Romero Britto.

Britto's work is fairly well-known and on display in dozens of locations around the world. He's also worked with multiple different brands on major advertising campaigns, with all of his work featuring bright colors, strong lines, and simple designs.

According to the lawsuit, Britto's specific Trade Dress is "strong, fanciful, non-functional, and inherently distinctive," composed of vibrant color combinations, the juxtaposition of different patterns, bold black outlines, and "uplifting, bright and happy visual themes." A quick visual comparison of Britto's work next to Craig & Karl's does indeed reveal similarities between the two.


Britto contacted Apple and asked the company to cease using the Craig & Karl images, but he did not receive a response, leading him to file a lawsuit. Britto is asking for damages and attorneys' fees, along with an injunction that would require Apple to stop using the artwork and Craig & Karl to stop producing artwork that mimics his style.
Tags: Apple Lawsuits, Romero Britto
[ 177 comments ]

mcdj
"artwork that allegedly mimics the design style that Britto is famous for."

"artwork that allegedly mimics the design style that Picasso was famous for."

AronDraws
If memory serves, you cannot copyright an art style. If they used his actual art, thats an issue. If it's influenced by his art, it's not something he can go after them for.
Score: 43 Votes (Like | Disagree)

840quadra
It all resembles stained glass to me.

Let me save you all time from reading the forum comments:

Because it's a lawsuit against Apple, nobody here will see the likeness. How dare you Craig & Karl-you must have penetrated Apple security and stole it from them their idea vault! Down with you!


Apple aside, that's not how art works. The work featured might use similar techniques but that's it (and that's 100% legal). It's a nuisance suit that should get thrown out very quickly
Score: 35 Votes (Like | Disagree)

theheadguy
Let me save you all time from reading the forum comments:

Because it's a lawsuit against Apple, nobody here will see the likeness. Down with you Britto! 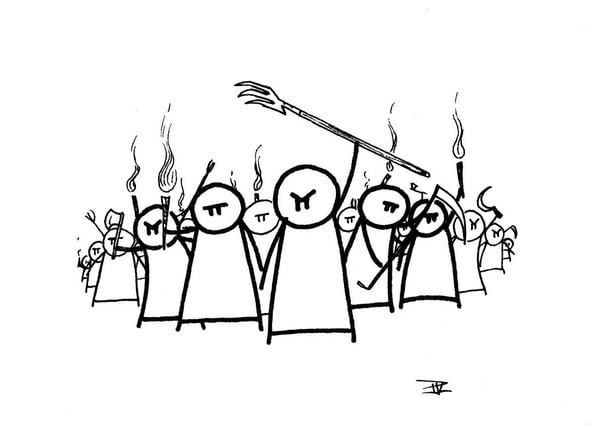 Kaibelf
Are they next going to sue every church which has ever used stained glass?
Score: 26 Votes (Like | Disagree)
Read All Comments