Over the weekend, MacRumors reader Andrew Turko sent an email to Apple CEO Tim Cook sharing his thoughts on the launch of the Apple Watch and its limitation to online orders only, and he received a response from Apple's executive team that sheds some light on Apple's concern over its launch plans and the potential for Apple Watch devices to ship out ahead of their prospective shipping dates.

Many people have been concerned with the long wait times for the Apple Watch, which saw shipping estimates slip for many models less than an hour after it became available for pre-order. All models sold out in less than six hours, and orders placed today won't ship for months. There are a lot of buyers who are facing delivery times than span into June, July, and August, but Apple believes that some of these orders could ship out earlier than their estimated shipping dates. 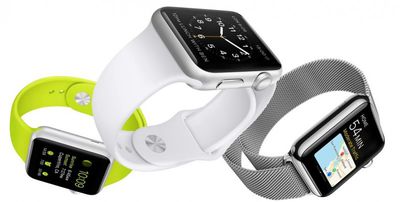 The Apple executive team member that spoke to Andrew referenced long wait times for earlier devices like the iPhone 6 and 6 Plus, noting that shipping estimates were often much longer than actual wait times and suggesting that the same thing might happen with the Apple Watch.

[Apple] said that June preorders will most likely ship sooner than June. Of course he didn't make any promises, but that's the reason Apple is announcing such an extended ship date after all - to avoid disappointment through false guarantees.

Andrew's email focused on Apple's decision to advertise April 24th as the Apple Watch launch day despite the fact that it won't be purchasable in store on that date, a point that stood out to both Apple's executive team and Tim Cook, who personally read the email.

"I think it'd be silly not to believe that there will be queues lined up around the globe on launch day if the "online exclusive" information regarding the (false) advertisement of a launch day isn't spread soon and fast."

The email echoed some of the problems Apple executives are debating, and Andrew was told the discussion over in-store stock on launch day and the advertisement of the 4/24 launch date for the Apple Watch are being considered by Apple with "great concern." Apple said it doesn't want people lining up at stores if there's no stock available to purchase.

Due to supply constraints and the desire to provide the best purchasing experience for customers, Apple has so far decided that all Apple Watch orders must be placed online. There will be no walk-in Apple Watch purchases available on April 24, unless the company's plans change. Andrew was told Apple's plans are not final, but it is unclear if Apple would be able to sell Apple Watch units in-store on launch day given the significant supply issues.

The executive Andrew spoke with said Apple "cares deeply" about the launch experience and hopes to improve the way people wait in line through the new Apple Watch reservation system. Online-only reservations are new territory for Apple in the United States, so it's not out of the realm of possibility that the company could revert back to traditional sales methods if its Apple Watch sales experiment does not work out.

Andrew's full email can be read on the MacRumors forums, as can more detail on the response that he received from Apple.

AppleScruff1
And Andrew was basically ridiculed in the thread he started about the email he sent. Kudos to you Andrew for sending it. I for one am glad that you got a response. Don't let the naysayers discourage you.
Score: 54 Votes (Like | Disagree)

Im' not worried.
I'm not buying a watch with a failing battery.


Then why did you go to the effort of reading an article that doesn't pertain to you and proceed to comment with a fact literally nobody cares about?
Score: 44 Votes (Like | Disagree)

DustinLH00
Why are people bitching about the 'complicated' launch process? What is so complicated about it? Pre-orders start on 4/10 at 12:01am PDT and the watch can only be purchased online. There, simple as ****.

If you want to touch one, make an appointment and come to the store.
Score: 26 Votes (Like | Disagree)

sulpfiction
Could this launch get any weirder?
Score: 25 Votes (Like | Disagree)

Why are people bitching about the 'complicated' launch process? What is so complicated about it? Pre-orders start on 4/10 at 12:01am PDT and the watch can only be purchased online. There, simple as ****.

If you want to touch one, make an appointment and come to the store.

They are complaining because the general public sees the  watch commercials showing the 24 April date and expect to be able to walk into a store and buy one.

It s like when the Avengers opens 1 May. You expect the movie to be in the theater, buy a ticket, and watch it. Not place an order for a ticket for a movie that you cannot view, except a trailer, and then get that ticket in a week, a month, two months and then get to see the movie.
Score: 14 Votes (Like | Disagree)

stanhope
I told you so

From second one, I said that Angela Ahrendts would be to Apple what Ron Johnson was to JC Penney. A Burberry experience is in no way translatable to an Apple one. The head set of the consumer base is drastically different as is that of the staff. As was said in the article, the staff gave wildly different accounts of what was to happen. One such notion, often repeated, was that we could pre-order and pick up our merchandise in any Apple store we selected. I asked this repeatedly of many different Apple sales people as I am headed on vacation and will be away from my primary residence on April 24. Some of the staff indicated that the bands were not interchangeable. I could go with illustrations of misinformation on but suffice it to say that the launch was a retail disaster. The formidable sales have more to do with the product that the "Cartier" style launch. If you think about it for a moment with anything resembling a clear head, what company on Earth would not want the FREE publicity in every national media vehicle and all of the local ones where there is an Apple store in market generated by the lines waiting for the newest Apple thing. The people interviewed in line always say glowing things about Apple and I have never seen one say anything negative. The local reporters ruminate on how Apple employees hand out water to those in line and coffee when it is cold. You'd swap this for what I experienced in the 2 stores I visited on launch day i.e. Skokie and Northbrook? Since the "try ons" were at a communal table, I was able to see the vastly different experiences different clerks gave. Someone at Apple with half a marketing brain and the other half a deep understanding of the Apple core customer needs to intervene and right this insane concept. I completely agree, if there is no product available at the Apple retail stores on April 24 then "launch" was not a mistake, it was a lie. In one day they have turned goodwill into a horror.
Score: 12 Votes (Like | Disagree)
Read All Comments