TechCrunch has now shared news of another acquisition that happened in 2014 -- the purchase of Dryft, a startup that specialized in creating keyboard apps. Dryft chief technology officer Randy Marsden, who also co-founded Swype, is listed as an "iOS Keyboard Manager" that joined Apple in September of 2014, suggesting the acquisition may have occurred around that date.

Dryft's technology was a keyboard that appeared only on the screen when a user placed a finger on the display, and as described by TechCrunch, it's "essentially a keyboard for tablets that tracks your fingers' movements," meaning it appears wherever your fingers are placed on the screen. 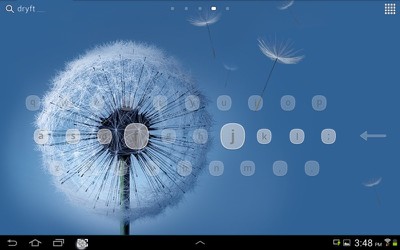 It is not clear if Apple plans to incorporate this specific technology into iOS or if it made the purchase of Dryft to acquire the company's employees to work on other keyboard features. As of iOS 8, Apple's operating system supports keyboards created by third-party developers, but the company has continued work on its own keyboard. iOS 8 brought keyboard improvements like QuickType, which offers word predictions to speed up typing.

Apple confirmed the acquisition to TechCrunch with its standard purchase statement: "Apple buys smaller technology companies from time to time, and we generally do not discuss our purpose or plans."

Google tends to acquire their competition and shut them down whereas Apple acquires useful technology and talent.
Score: 12 Votes (Like | Disagree)

I'd rather Apple implement this in a physical keyboard.


So, just so we understand, you want a physical keyboard that appears when the user touches the screen?
Score: 5 Votes (Like | Disagree)

Max(IT)
A Swype type keyboard integrated into iOS would be great.

Google tends to acquire their competition and shut them down whereas Apple acquires useful technology and talent.

I've never really seen the need to explore other keyboards than the stock one on my phone. What is the best one to use?